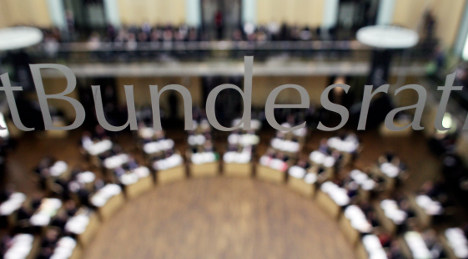 Tax cuts amounting to €8.5 billion ($12.2 billion) cleared the Bundesrat, which represents Germany’s 16 federal states, after weeks of wrangling between the federal government and state leaders, who said they would suffer from the drop in revenue.

State leaders from within Merkel’s own conservative Christian Democrats had threatened to block the bill, intended to spur growth from January 1 as Europe’s biggest economy fights to shake off the effects of its deepest postwar recession.

The package will ease the tax burden on families with children and cut sales taxes for hotels, robbing states of hundreds of millions of euros in income.

The debate was embarrassing for Merkel, who won re-election in September with a solid majority that allowed her to dump her previous coalition partners, the centre-left Social Democrats, in favour of the pro-business Free Democrats.

It forced her to make major fiscal concessions by agreeing to foot up to 40 percent of the bill for education in the coming five years – an expense that until now had fallen nearly exclusively to the states.

The final hold-outs, the conservative leaders of Saxony and Schleswig-Holstein, dropped their opposition on Friday, allowing the measure to pass.

“I believe this is a good day for Germany,” Schleswig-Holstein premier Peter Harry Carstensen told reporters after agreeing to vote for the tax breaks. “The fighting and the resistance were worth it.”

Although Berlin insisted the funds for education had nothing to do with its tax bill, commentators said it had effectively “bought off” the states for a fiscally dubious measure.

Even the public is wary about the tax gifts from the cash-strapped government, with a recent poll by the independent Forsa institute showing that 69 percent of Germans disapproved of the tax breaks at this stage.

The economic downturn has blown a huge hole in public finances, with Merkel’s government predicting this week it will have to take on a record €85.8 billion in new debt in 2010.