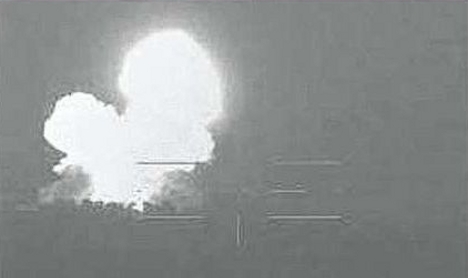 As new details of the incident continue to increase pressure on German officials, the paper reported that Col. Georg Klein – who ordered the September 4 air strike – was also referring to video taken by Bundeswehr soldiers near the site where two fuel tanks hijacked by the Taliban were bombed.

Bild reported that until now it was thought that Klein only used videos taken by US fighter jets to make his decision. But the Bundeswehr video, featured on the paper’s website, shows the moments leading up to the attack, followed by a dramatic fireball and shots of the burning fuel trucks.

Meanwhile weekly newspaper Die Zeit reported it had seen documents proving that Germany’s elite KSK special forces – which work separately from the Bundeswehr – were involved in the incident and in close contact with German military headquarters in Potsdam on the night of the bombardment.

“Can it be that Col. Klein […] was part of a long running operation by the KSK against the Taliban?” the paper asked.

Last week media reports alleged that the KSK played a key role in the air strike claiming that Col. Klein was in charge of the secret Task Force 47 the night he ordered the attack near the northern Afghan city of Kunduz.

The special ops unit reportedly has its own command structure at the nearby German base and KSK soldiers make up about half of its ranks. Their duties include hunting Taliban and terrorists in the region.

Bild said that according to NATO’s rules of engagement, Klein only would have been able to call in the deadly air strike as the commander of TF47.

The paper said members of Germany’s parliamentary defence committee were first informed of the existence of TF47 on November 6, the same day that Defence Minister Karl-Theodor zu Guttenberg said the air strike had been “militarily appropriate.” He has since admitted the attack was a mistake due to the high number of civilian casualties.

A parliamentary inquiry looking into the matter took up its work this week.

ISAF reports estimate that up to 142 people – many of whom were civilians – were killed that night. Amid allegations of a cover-up, the Bundeswehr’s chief of staff and Guttenberg’s predecessor at the Defence Ministry, Franz Josef Jung, both resigned.

Meanwhile new Defence Minister Minister Karl-Theodor zu Guttenberg, who took his post in late October, has vowed a thorough investigation into the accusations that German defence officials withheld information about the air strike.

Media reports recently revealed that while the minister has said he did not have access to information seen by his predecessor Jung, he in fact had a report by the International Red Cross that deemed the bombardment contrary to international law and responsible for the deaths of at least 74 civilians.