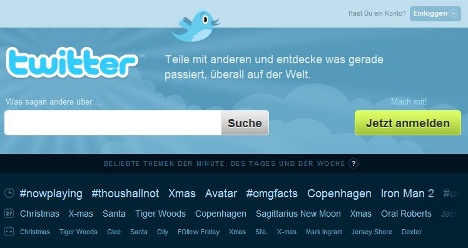 Commands and information became available in German on Wednesday as part of Twitter’s recent push to enhance service for international users. The micro-blogging site was initially only available in English and Japanese, but in the last two months new versions in Spanish, French, Italian, and now German have been added.

German will be the final language added for the year, Twitter said.

The company already has many users within Germany, but they are hoping to reach even more people by offering their service in the country’s native language, they said.

Several German politicians are already avid Twitter users, which has occasionally landed them in hot water.

Earlier this week, a state parliamentarian in Lower Saxony caused the legislature to erupt in chaos after he labelled another MP as right-wing extremist via Twitter. And a member of the German parliament caused a stir in May when he leaked the results of German President Horst Köhler’s re-election before it had been officially announced.

More than 58 million people use Twitter to create “tweets,” or 140-character text posts that appear on a profile page and go out to anyone who subscribes to their feed.