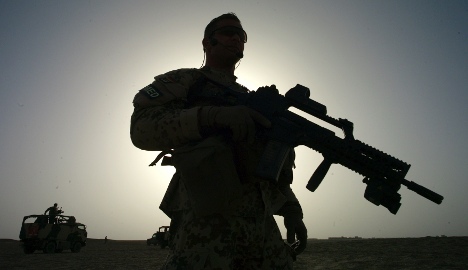 It’s not looking good for Col. Georg Klein at the moment.

The Bundeswehr officer responsible for calling a controversial air strike on September 4 in the northern Afghan province of Kunduz appears to have made a flawed, lonely decision that resulted in several civilian casualties.

According to secret military documents released by the whistleblower website WikiLeaks on Monday, Klein relied solely on remote reconnaissance before having NATO jets bomb two fuel trucks hijacked by the Taliban. The colonel and his air control officer also apparently overruled the concerns of US pilots who wanted to use low-flying passes to scare people away before attacking.

The incident has already sparked the resignations of the Bundeswehr’s top officer, Wolfgang Schneiderhan, and one of Chancellor Angela Merkel’s cabinet ministers, former Defence Minster Franz Josef Jung, amid allegations they withheld information about the civilian deaths. But Klein’s blunder could also have repercussions of far graver consequence for Berlin’s military engagement in the strife-torn country.

Sadly it has taken the tragic events surrounding the air strike to expose Germany’s half-hearted approach in Afghanistan: having soldiers there is fine as long as they aren’t expected to fight and kill anyone.

Certainly, Klein never meant to cause the deaths of innocent Afghans – he apparently thought there was an imminent threat to German troops stationed near Kunduz. Unfortunately, Germany’s willfully opaque rules of engagement for the Bundeswehr make it difficult to determine if the colonel actually overstepped his authority to call such a strike in the first place.

After years of denial during which German troops were touted as merely being part of a heavily-armed reconstruction effort, Berlin tinkered with its military strategy last spring to allow the Bundeswehr to engage in more offensive action in Afghanistan. However, it failed at the time to open another front back home in the fight for public opinion.

Knowing the Bundeswehr’s deployment in Afghanistan is highly unpopular, the German government still refuses to say its troops are “at war” with the Taliban and their al-Qaida terrorist cohorts. Berlin has also consistently rejected calls to have the Bundeswehr join US, British, Canadian, Dutch and other troops bearing the brunt of heavier fighting in the southern part of the country.

This is a disservice to both Germany’s NATO allies and the already considerable sacrifices made by German men and women in uniform.

Undisputedly there is a still strong sentiment in German society that says the country’s troops should never again be aggressors. This is both understandable and even admirable in light of Germany’s troubled past. However, no one can realistically compare the Bundeswehr’s mission in Afghanistan to the darker chapters of German history. And allowing the country to descend into chaos and become a staging base for Islamist terrorists is simply not an option.

Germany’s NATO allies must be doubly dismayed by the Klein incident. Not only will they regret the civilian loss of life and how the Germans have bungled the air strike’s aftermath, but they are now faced with the possibility Berlin will lose its stomach for fighting in the face of growing public opposition to the military deployment.

And this after they have pushed Germany for years to allow the Bundeswehr to become more involved in combat operations.

Instead of hoping the Kunduz air strike debacle will go away, Chancellor Merkel’s government must now step up and explain to Germans why their troops are in Afghanistan. Berlin also needs to allow them to engage the enemy alongside its western and Afghan allies.

And if the government can’t make a good enough case to both the German people and parliament for a more robust mandate for its military mission in Afghanistan, the Bundeswehr should be withdrawn.

Sitting on the fence with the Hindu Kush alight in the distance will simply no longer suffice.