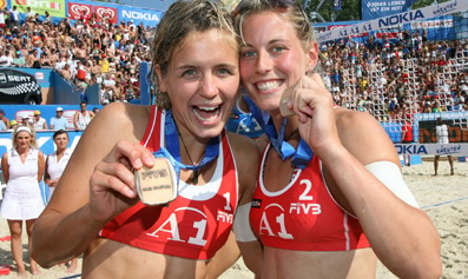 Laura Ludwig and Sara Goller in Klagenfurt in 2007.

It’s the cold and dark time of the year in Germany, but instead of wanting to cocoon at home Laura Ludwig and Sara Goller are raring to get to back to work.

Of course, who wouldn’t when your job consists of jetting some of the most beautiful beaches around the world, suiting up in a bikini and playing the sport you love?

As occupations go, “beach volleyball is pretty decent,” admits Goller, a 25-year-old from Starnberg in Bavaria. “We travel a lot, get to see some of the world’s most beautiful spots, meet people, make friends all over the world, and there’s a lot of sun!”

But as fun as it sounds, being a professional athlete is a lot of hard work for both Goller and her 23-year-old partner Ludwig, who hails from Berlin. Together, they are Europe’s top women beach volleyball team for two years running.

The pair finished up their fifth season together in November, after playing in 20 tournaments from Barcelona to Brasilia on the demanding International Volleyball Federation (FiVB) World Tour.

Between competitions the women train on an almost daily basis with their New Zealand coach, Craig Seuseu, in the state-of-the-art Olympic indoor volleyball centre in Hamburg. They also spend plenty of time in the gym working on their strength and speed.

Despite their relatively young ages, the two women have enjoyed long volleyball careers, having both played the outdoor version of the sport for more than a decade. Of course, it hasn’t always been a smooth ride to the top.

The frequent travel and living out of suitcases for weeks at a time not only mean time away from the comforts of home and some “good German bread,” but boyfriends, family and friends. There’s also the pressure of performing consistently well.

“The biggest low we had was at the beginning of our career [together],” Ludwig explains. “We won almost all the country (qualifying matches for unseeded teams) on the World Tour, but played really badly in the tournaments.”

As a result they failed to establish themselves and had to play additional matches just to stay in the running for tournament prize money. “It was really de-motivating,” Ludwig says.

All their persistence and hard work eventually paid off though, and 2009 has been a good year for Germany’s best women’s beach volleyball team. For the second successive season, they were capped the number one team in Europe and also achieved their highest FiVB ranking, finishing the year fourth in the world.

Naturally, their success hasn’t gone unrewarded. As well as winning a host of FiVB awards, including second most inspirational player on the World Tour for Ludwig, and third best hitter for Goller, this year also saw them take home almost €180,000 in prize money.

Being tall, blonde and at the pinnacle of your sport has obvious other advantages, and over the years the women have attracted lucrative sponsorship deals with big names like Nike, the fashion label Orwell and the skin-care firm Lancaster.

However, somewhat surprisingly given their achievements in something they are clearly good at while travelling to places most only people dream of, Ludwig and Goller don’t necessarily consider playing beach volleyball to be their perfect jobs.

“I started playing professionally as soon as I finished school,” says Ludwig. “So I didn’t have the chance to study, but what I think I’d really like to do is teach young kids.”

“Beach volleyball is ideal for me at the moment, but maybe not forever. There will be a time when I want to stay home a little more,” Goller says. “I don’t what my ideal job would be.”

Whatever she ends up doing though, she’s convinced of at least one thing: “I want to stay flexible and do different things. Staying at the office all day would kill me.”

Fortunately, there’s no threat of a cubicle in sight. Soon Goller and Ludwig will jet off once more, this time to the summery climes of New Zealand to join their Kiwi coach Seuseu for pre-season training. Working will stay confined to the beach.