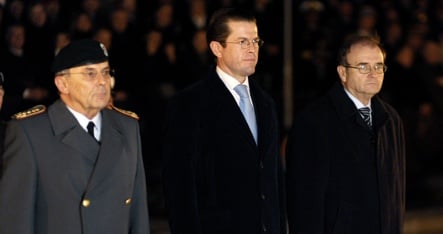 In a revelation that is likely to put more pressure on Defence Minister Karl-Theodor zu Guttenberg, reports in Der Spiegel magazine and Sunday newspaper Frankfurter Allgemeine Sonntagszeitung say that the Defence Ministry may not have given the real reasons for last month’s sacking of Chief of Staff Wolfgang Schneiderhan and ministry official Peter Wichert.

Up until now, the official reason for the sackings had been that Schneiderhan and Wichert had answered ‘no’ when asked by Guttenberg whether there were any reports, other than a NATO report, on the fatal air strike in Afghanistan on September 4 which killed 142 people.

Guttenberg told Schneiderhan and Wichert within hours of the meeting that they no longer had his support.

But according to new information, possibly leaked from the circle of the two men, both Schneiderhan and Wichert told Defence Minister Guttenberg of four other reports, including a two-page report by Colonel Georg Klein, who ordered the attack, a military police report critical of Klein’s decision, the report of another German colonel from an “Initial Action” inspection team, as well as a report from the International Red Cross.

According to the Frankfurter Allgemeine Sonntagszeitung, Wichert subsequently wrote a letter to Guttenberg asking the Ministry to correct the allegation that they had failed to mention any other reports. No such correction to the official version has been made.