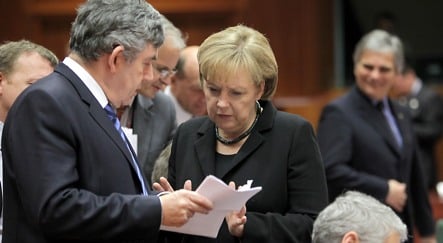 The idea is among proposals they want considered to ensure that trillions of dollars of taxpayers’ support during last year’s financial crisis is repaid with a slice of boom-time profits.

But while Germany endorsed the general aims, Merkel said her country’s constitution prevented her from copying action in London and Paris to impose one-off taxes on bankers’ bonuses earned this year.

The 27 EU member states agreed, in a joint statements following a two-day summit in Brussels, that an “economic and social contract” needs renewing “between financial institutions and the society they serve … ensuring that the public benefits in good times and is protected from risk.”

But Merkel said she had no choice but to rule out the otherwise “seductive” idea of a tax on bank bonuses, warning that she could not “ride roughshod over the constitution,” instead favouring “guarantees to prevent taxpayers once more being asked to dip into their pockets when banks are going through a crisis.”

She added: “That’s where a cross-border financial transaction tax comes in.”

New German legislation covering bonuses is due next year, although eight German banks have said they will voluntarily apply interim standards based on Group of 20 guidelines for “sustainable remuneration.”

While the EU’s language on taxing financial transactions erred on the side of caution, the inclusion of the idea, which they have been kicking about since the 1970s – represents an alignment between Europe’s three core powers.

Merkel had already sought support from fellow EU leaders in September, although her EU partners were unwilling to back her then.

But Brown, who trails in polls ahead of a general election next year, now sees an “urgent need” for a new deal between banks and society.

“I think many bankers are willing to support this, because they know there is something not right about this relationship,” he underlined. Sarkozy said that “conditions are ripe,” for the move.

“The mood has moved on and once again, our two countries are at the forefront of that change,” insisted the French president, who held a joint press conference with Brown in a display of cross-Channel unity.

The tax is often named after Nobel laureate James Tobin, who first proposed his levy as a means of reducing speculation in global markets.

But the Robin Hood-style idea has received no encouragement from the United States, whose Treasury Secretary Tim Geithner said curtly: “No, that’s not something that we’re prepared to support.”

The G20 group of nations has already asked the IMF to study the feasibility of such a measure, but the latter’s head, Frenchman Dominique Strauss-Kahn, warned that it would be “very difficult” to implement, “in fact it is impossible.”

Due to give its report next April, the IMF sees what it calls a “better” solution – a tax that would “curb risk-taking in the financial sector” and make bankers “take fewer risks because it will cost them more, while at the same time creating a reserve fund which could be used in a crisis.”