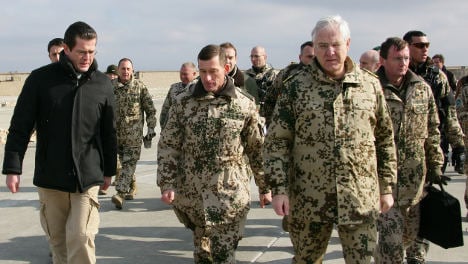 Guttenberg was accompanied by parliamentary defence experts and he held talks with soldiers after landing at a base in the northern Afghan Kunduz province.

Discussions likely included the controversial September 4 bombardment that killed up to 142 people – many of whom were civilians according to NATO estimates. Since German Col. Georg Klein ordered the bombing of two fuel trucks hijacked by the Taliban there has been intense political fallout.

Amid allegations of a cover-up, the Bundeswehr’s chief of staff and Guttenberg’s predecessor at the Defence Ministry, Franz Josef Jung, both resigned.

Meanwhile Guttenberg, who took his post in late October, vowed a thorough investigation into the accusations that German defence officials withheld information about the air strike.

“I want the most transparency possible for the parliament and the German people,” Guttenberg said after meeting Bundeswehr commanders in Kunduz.

Weekly magazine Stern said on Wednesday that while the minister has said he did not have access to information seen by his predecessor Jung, he in fact had a report by the International Red Cross that deemed the bombardment contrary to international law and responsible for the deaths of at least 74 civilians.