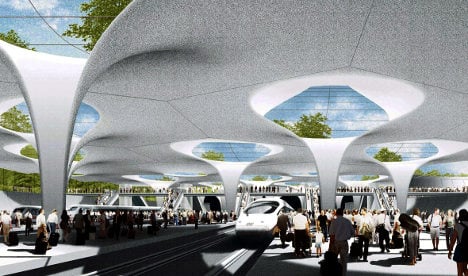 State, municipal and Deutsche Bahn representatives decided to go ahead with “Stuttgart 21,” the massive overhaul of the southwestern German city’s main train station, on the basis of a new cost projection of €4.09 billion – more than €1 billion above the original price.

The huge undertaking, which will build a spacey underground train terminal and modernise the surrounding rail infrastructure, could have been torpedoed this year had it been expected to cost more than €4.5 billion.

Officials will now have a mere €438 million to cover the unforeseen expenses of what will be one of Europe’s biggest construction projects, transforming 100 hectares of central Stuttgart and digging 57 kilometres of tunnels.

The project has been widely criticised because it will tear up central Stuttgart for more than a decade and demolish parts of the city’s old landmark train station built by architect Paul Bonatz in 1928. But its supporters argue it will make the city an important rail link between Eastern and Western Europe.

Construction is expected to begin in February.