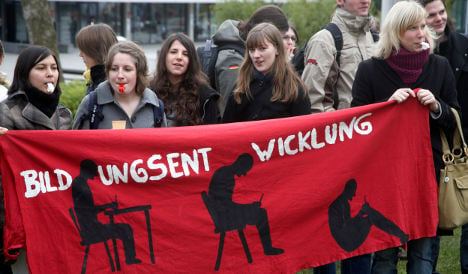 The Standing Conference of the Ministers for Education and Cultural Affairs (KMK) plans to finalise a catalogue of reforms already laid out at a meeting this autumn, Bavarian education minister Ludwig Spaenle told public broadcaster ARD. Implementing the measures will, however, be up to the universities themselves, he added.

“We also want to remind them of this today,” he said.

Among the reforms are making the new bachelor’s programme more “flexible” and a reduction of testing to an “appropriate level,” he said.

“That means concretely that per module, per academic unit, only one test will be planned,” Spaenle said, adding that the KMK plans to continue dialogue with students over reforms.

Meanwhile some 5,000 university students have mobilised to express their dissatisfaction as part of continuing protests that have been taking place across the country for in recent months.

Protesters have said they are angry about changes that are part of the Bologna process, meant to bring standardised bachelor’s and master’s programmes to European universities. They are also opposed to the introduction of modest tuition fees and what many consider the chronic underfunding of education in Germany.

Students also complain some institutions have failed to adapt programmes to the shortened period of time required to complete a degree. Others say that there are not enough entrance spots available to those wishing to enrol at universities in Germany.