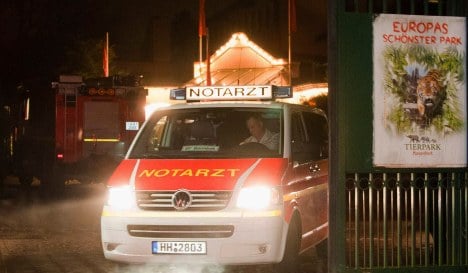 Just before the “Pagels Dinner Zirkus” began at the Hagenbeck zoo, 28-year-old Christian Walliser stumbled and fell, losing control of the big cats. As some 200 spectators looked on, three of the five Bengal tigers attacked.

“According to their nature the three big cats began to ‘play’ with the animal trainer as a spontaneous reaction,” show director Stefan Pagels said in a statement, adding that it had been a “tragic accident.”

“It looked as though they were playing with a sack,” one witness told daily Bild on Wednesday.

According to Pagels, other trainers were able to lure the tigers away from Walliser within 30 seconds by following their plan for such emergencies. After the animals were secure, a doctor from the audience stabilised Walliser and stopped the bleeding from his severely injured hand as other spectators were evacuated from the zoo’s historic dressage hall.

Walliser was transported to a nearby hospital with life-threatening injuries and two audience members were treated for shock on-site.

The trainer suffered major head and chest wounds, and had to have his hand amputated, news agency DDP reported.

“An accident during certain special tricks with animals on the trapeze or on the high wire is unfortunately always possible,” Pagels said, adding that performers and crew are extremely worried about their colleague.

But late in the evening the ensemble decided together that the circus motto, “The show must go on,” applied even in this case, and they will go ahead with their next performance as planned on December 15 – but this time without tigers.

As of mid-morning on Wednesday the University Medical Centre Hamburg-Eppendorf (UKE), where Walliser is being treated, was unable to provide details on his condition.

A similar accident occurred six years ago in Las Vegas when famous tiger trainer Roy Horn of the “Siegfried and Roy” duo was severely injured in an attack on-stage.

The Hagenbeck Tierpark arena is among Europe’s oldest circus halls. Some 800 shows with tigers, lions, elephants and other animals have been staged there in the last decade without incident.