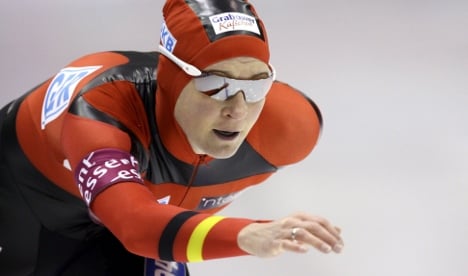 The ruling means the 37-year-old Berliner now has a final chance to qualify for the 2010 Winter Olympics in Vancouver at the 3,000-metre race this weekend.

“It’s naturally super for me to know that the training of the last weeks was worth it and I now have the possibility to qualify for the Olympics,” she said while working out on the ice after the decision was announced.

Pechstein plans to appeal a November 25 Court of Arbitration for Sport (CAS) decision, which on upheld a two-year ban due to irregularities in her blood. The ban is scheduled to end on February 9, 2011 but her lawyer filed an appeal on Monday, referring to numerous alleged procedural errors in the case.

The court gave Pechstein 30 days to complete her appeal, but because the Christmas holidays fall during this period the case won’t be reviewed until after the new year.

Head of the DESG German speed skating association Gerd Heinze had already signalled that Pechstein would be nominated to skate at the competition in Salt Lake City in the case of a favourable court decision. But whether she will skate at the Olympics is up to the court, he said.

Last month’s ruling by the Lausanne-based CAS upheld a July 1 decision by the International Skating Union (ISU), which banned Pechstein from the sport after tests showed she had an abnormal count of reticulocytes, or early-stage red blood cells. It did not, however, reveal any illicit doping substances.

Pechstein maintains that she never took performance-enhancing substances and says she may have a genetic abnormality that caused the irregular blood count.

According to a court statement, Pechstein gave three blood samples during the World Speed Skating Championships in Hamar, Norway in February 2009. These samples showed a reticulocyte percentage of 3.49, 3.54 and 3.38 – well above the 2.4 percent limit. Meanwhile another sample taken 10 days later showed a significantly lower percentage of 1.37.

This “sharp drop” could not be “reasonably explained by any congenital or subsequently developed abnormality,” the ruling said.

“The panel finds that they must, therefore, derive from the athlete’s illicit manipulation of her own blood, which remains the only reasonable alternative source of such abnormal values,” it concluded.

The ban threatens to end the winter Olympian’s career, which has garnered five gold, two silver and two bronze medals.