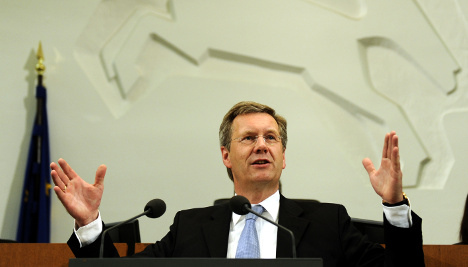 The vote, scheduled for December 18 in the upper house the Bundesrat, looks as though it could fail as state leaders continue to revolt against the €8.5 billion in tax cuts. Two conservative premiers have vowed to vote against the package and Schleswig-Holstein premier Peter Harry Carstensen has even threatened to resign.

The federal government would shoulder €4.63 billion of the loss in revenue, Germany’s 16 states €2.28 billion and municipalities €1.57 billion. All of the states led by centre-right Christian Democratic-Free Democratic coalitions must vote for the measure, or it won’t pass.

While Carstensen continues to oppose its approval, fellow Christian Democrat Wulff gave in on Tuesday, saying that the package proposed by the new government coalition included “very, very many sensible things.”

Among the aspects of the bill Wulff supports are changes to the business inheritance tax, which insures that enterprises can continue without job loss. Changes to corporate and family taxes are also in the interest of rebellious Carstensen’s northern of state Schleswig-Holstein, he added.

“We also find certain rules very sensible, such as the compensation for gas lines, which is helpful in northern Germany, and we find the relief for families good too,” Wulff said, adding that the resulting burden on state budgets was “ultimately bearable.”

Wulff’s own state of Lower Saxony is set to lose some €130 million if Merkel’s fiscal package passes, he said, but added that other economic stimulus actions could reduce this number.

“Then we would be foolish if we didn’t negotiate on this,” Wulff said, adding that there would be no special solution offered for Schleswig-Holstein.

But in an interview with daily Rheinische Post, Wulff rejected a suggestion by Merkel that the federal government provide extra educational funding for states in exchange for their vote to take the tax revenue hit.

Meanwhile his CDU colleague Helmut Rau, education minister for the also reluctant state of Baden-Württemberg welcomed the offer in an interview with the Berliner Zeitung.

“Every euro is welcome,” Rau said. “As education minister I won’t say no.”

Meanwhile the President of the Federal Court of Auditors Dieter Engels said on Tuesday that there was no room for Germany to add to its mounting debt. He suggested that the government conduct a budgetary consoldiation rather than cut taxes. For example, the government wasted an excess of €1 billion in 2009 on expenses that could easily be eliminated, he said.