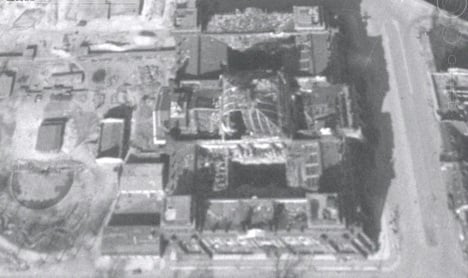 What was left of the Reichstag in 1945. Photo: Google Earth Screenshot

Using Allied aerial intelligence images shot on March 21, 1945 provided by the US National Archive, the geography program’s makers have created a patchy historical map of the German capital city’s Mariendorf, Mitte, and Prenzlauer Berg districts following the extensive bombing of the war and the Soviet assault on the German capital.

Users must have the updated 5.0 version of Google Earth before they can click on the tiny clock in the program’s toolbar where a sliding time scale takes them back to 1945. Here they will find huge craters that speckle the Tempelhof airfield, a gutted Reichstag surrounded by a treeless Tiergarten and the once grand Unter den Linden boulevard leading to the hollowed-out dome of the Berlin Cathedral.

If they slide the time scale to the right, they can compare this apocalyptic landscape to that of 1953, where one begins to see the results of rebuilding efforts after the war. These later photos were provided by the aerial photo data bank in Würzburg, and can also be compared to contemporary images.

“Most active users of Google Earth outside of the US are located in Germany,” Google spokesperson Stefan Keuchel told The Local. “It’s been like that for years. Germans really like this product,” he said, adding that its popularity helped inspire the most recent project for Berlin.

The new feature follows this year’s springtime launches of the German Street View function and a 3-D format for the virtual globe’s Berlin map, which allows virtual tours of some 500,000 buildings and 80 detailed models of landmarks.