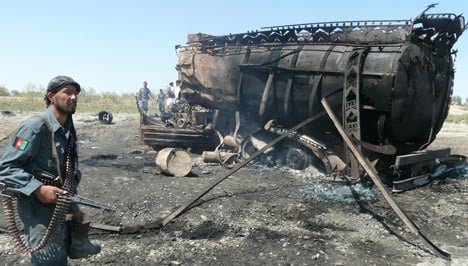 The Defence Ministry said it was in contact with a lawyer for victims of the September raid on two fuel trucks near Kunduz in northern Afghanistan. Up to 142 people were killed, reportedly including dozens of civilians, in the NATO bombardment.

“We will begin talks with (German-Afghan attorney Karim Popal) about how the compensation claims will be met,” a ministry spokesman told a regular government news conference, adding that Berlin hoped to avoid a court battle.

Popal is demanding payouts from the German military for 78 families of Afghan casualties. He says there were 179 civilian victims including 137 dead, 20 injured and 22 missing, leaving 91 women as widows and 163 children as orphans.

According to Popal, five further victims were members of the radical Taliban, which the defence ministry says the strike had targeted.

The ministry spokesman said an investigation into the exact toll of the raid was ongoing but added that Berlin would not try “to drive down the number of civilian victims as low as possible.”

The ministry must also determine whether there are other affected families who are not represented by Popal, he said.

Popal welcomed the government’s cooperation and confirmed he had received a fax from the Defence Ministry stating it would deal with the claims “in an unbureaucratic manner and quickly.”

The raid has provoked an anguished debate in Germany, where polls show the Afghan deployment is deeply unpopular.

Defence Minister Karl-Theodor zu Guttenberg said Thursday he believed the strike had been “militarily inappropriate,” reversing an earlier assessment of the air strike.

His predecessor Franz Josef Jung, in office at the time of the raid, stepped down from his new position as labour minister last month because he had previously insisted “only Taliban terrorists” died in the attack.

Der Spiegel magazine reported this weekend that the US fighter pilots called in by German Col. Georg Klein for air support questioned their orders several times before attacking.

Radio communication between the F-15 pilot with the call sign ‘Dude’ and the Germans on the ground showed that the Americans wanted to carry out not just one or two low flying passes as warnings but five.

But Klein and his forward air controller with the call sign ‘Red Baron,’ commanding the air strike from a German base, overruled the pilots and ordered an attack.