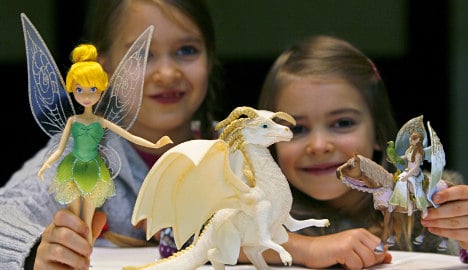 “There is an urgent need for action,” BfR experts said in a new federal study.

According to the WAZ media group on Monday the amount of dangerous substances contained in children’s playthings far exceeds allowed levels – often by a factor of several hundred.

The EU has no rules for permitted levels of polycyclic aromatic hydrocarbons, known as PAH, which have been linked to cancer. According to the BfR, PAHs are suspected of “changing genotypes, causing cancer and impairing reproduction.”

According to EU regulations, one particularly dangerous and frequently used chemical compound should only be allowed in concentrations of up to 100 milligrammes per kilogramme.

“Already in this case children would take in the same amount as that contained in 40 cigarettes per day in just one hour of contact,” the study said.

But it’s also not too difficult to avoid dangerous toys, the TÜV safety certification organisation told the paper.

Many toys containing carcinogens are from China, though spokesperson Rainer Weiskirchen emphasised that not all toys from the country are potentially hazardous.

Another TÜV expert told the paper that one simple way to recognise potentially dangerous toys is with a smelling test.

“I call it the one-euro-store smell,” TÜV expert Stefanie Drückler said. “It bites at the nose immediately.”

The organisation recommends avoiding toys with this distinctive smell and choosing toys with the Geprüfte Sicherheit symbol, which features a large “GS” logo and guarantees safety. Parents should also not buy in no-name stores or online.