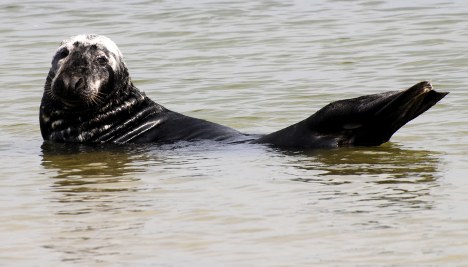 The seals were nearly wiped out during the last century by fishermen who considered them competition for prey – and wanted to secure five Reichsmarks per pelt paid by the Prussian government.

At one point it was thought there were just 1,500 left in the Baltic Sea, and just 100 or so on the east German coast.

Now their numbers are recovering, thanks to seals moving in from the Scandinavian coast line, and a population has been identified on the north German island of Rügen.

The first seal-watching boat went out to see them on Saturday, although weather conditions were not ideal for photographs, leaving some on board somewhat disappointed.

The seal-watching trips have promised to remain at least 400 metres away from the animals, from where they can be seen yet not disturbed.

“These seals have been here for thousands of years, and were wiped out by people. Now we can be witnesses to their return,” said Henning von Nordheim from the Federal Office for Nature Protection.

The boat trips to see the seals are limited, and will be regularly reviewed to ensure the seals are not disturbed. The World Wide Fund for Nature (WWF) suggested the trips be delayed, but is said to be happy with the agreement for boats to keep their distance.

PARTNER CONTENT
How to become a Lord or Lady (and help save the Scottish Highlands)
Url copied to clipboard!