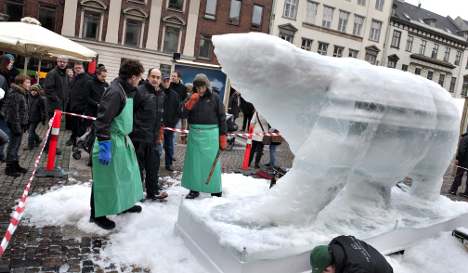 Wildlife activists carve a polar bear out of ice in Copenhagen Photo: DPA

“An agreement that global warming must not surpass 2.0 degrees (Celsius, 3.6 degrees Fahrenheit average over pre-industrial times) must be the goal for Copenhagen,” Norbert Röttgen told the Bild am Sonntag newspaper ahead of the conference’s start on Monday.

“If in the end the two-degree limit is not part of the accords, Copenhagen will not be a success,” he told the paper, warning that the stakes could not be higher.

“If we carry on as we have, life as we know it on this planet will no longer be possible,” he said.

“That is a clear signal that Obama wants a success and, despite the risks, is willing to put his weight into it,” Röttgen said.

“He knows if America does not live up to its leadership responsibilities in Copenhagen, it will lose its technological leadership in the world in the long run. Obama has got to deliver now on the climate issue.”

Röttgen called on his fellow Germans to do their part by buying cars that are less environmentally harmful.

“We must reach the point where citizens pay attention first to fuel consumption and carbon dioxide emissions and then to speed and horsepower,” he said.

The 192 members of the UN Framework Convention on Climate Change aim to forge a new pact to curb greenhouse gas emissions and their impact after the Kyoto Protocol expires in 2012.

The UN’s Intergovernmental Panel on Climate Change said in its so-called “business-as-usual” forecast that voracious use of coal and other fossil fuels would see planetary warming of 4.0-to-6.4 Celsius by 2100 compared with 2000, unleashing catastrophic effects.