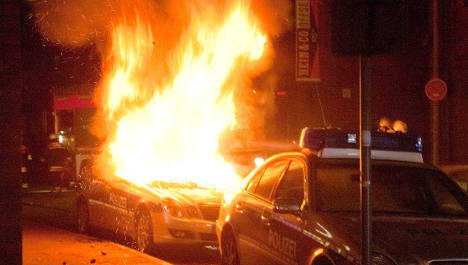 In a letter to the Hamburger Morgenpost newspaper, the group, who set fire to two police cars, set up burning barricades and threw stones at officers, said they were no longer prepared to face riot police.

They used the Greek word Koukoulofori, as a name, which translates roughly to ‘the hoodie wearers’.

“Rather than allowing ourselves to be beaten bloody by the Robocops at demos,” the letter called for those who felt the same way, to undertake similar surprise attacks as that on the police station on Thursday.

The letter also asked locals for understanding for any disturbance such as flat tyres.

It also threatened a riot should the local squatted house, known as Rote Flora, be cleared of the punks, anarchists and others who live and organise activities in it.

Such a move would provoke what the letter called, “A lively international little community from all corners of Europe to ensure a brilliant and unforgettable experience.”

The police at the station which was attacked have affixed several new video cameras to the building, but would not release further details.

The death of 15-year-old Alexandros-Alexis Grigoropoulos, shot by a policeman during a demonstration in an alternative area of Athens on December 6 last year, sparked rioting in the Greek capital and other cities around Europe.

Athens was the scene of further rioting on Saturday night, with several cars being destroyed, and one district town hall being occupied for several hours. Police arrested more than 160 people, 75 of whom will be charged with offences.

Student organisations across Greece have organised demonstrations for Sunday, provoking fears of further trouble. More than 10,000 police officers have been put on duty for the day, while minister for civil protection, Michalis Chrysochoidis said, “We will not leave Athens to the vandals.” He said officers would only watch the demonstrations, but that they would show zero tolerance for acts of violence.