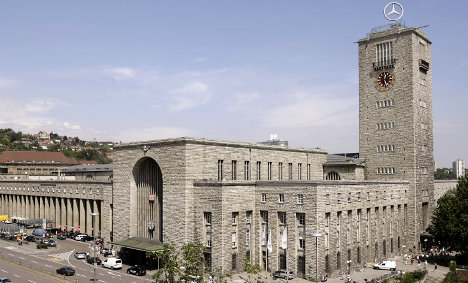 When the bulldozers come for Stuttgart’s historic central station, Klaus Gebhard will be there.

The 52-year-old writer and photographer has even set up a website to rally opposition to the planned redevelopment of city’s main rail hub. Seventy-nine people including Gebhard have so far committed themselves to stopping the mammoth project by blocking the wrecking crews with their bodies if need be.

“I’ve lived 20 years in the city centre,” Gebhard said. “It makes me very angry and there are a lot of people like me who are going to keep fighting.”

Click here for photos of the controversial new project.

Stuttgart 21, as the redevelopment is called, is no mere architectural facelift. If it goes ahead next year as planned, it will be one of Europe’s biggest construction projects, transforming 100 hectares of central Stuttgart, digging 57 kilometres of tunnels and consolidating the capital of Baden-Württemberg as an important rail link between Western and Eastern Europe.

To advocates, that means economic growth, investment and thousands of jobs.

To critics, it is a white elephant that will cost at least €4.5 billion, take 11 excruciating years and fundamentally change central Stuttgart’s character. But it is the partial destruction of the original train station that is turning the project into a debate about Germany’s cultural history as well.

Campaigners made headlines last week when six members of the International Council on Monuments and Sites (ICOMOS), which advises the UN’s cultural arm UNESCO, signed a letter to German politicians calling for Stuttgart station to be considered for world heritage status, which would put it alongside the Cologne Cathedral, Egypt’s pyramids and the Great Wall of China.

But the man behind that letter, historian and campaigner Matthias Roser, admitted the move was more about raising awareness than a serious proposal.

“We did it to make sure certain politicians know how important this building is in the estimation of architects and historians,” he said.

The odds of getting a world heritage listing are long. Yet there is little dispute that the building is worth preserving, even from supporters of the redevelopment. They argue the important parts of the old station – the main halls and clock tower – would be kept and incorporated into the new design.

The destruction of the side walls or “wings” is a small price to pay, according to Reinhard Löffler, a state parliamentarian in Baden-Württemberg for the conservative Christian Democrats (CDU).

“We don’t just live in Stuttgart or even Germany anymore,” he said. “We live in Europe. No city in Germany has such an opportunity as we have to link Europe and benefit from it. With better transport comes economic growth. It always has.”

This doesn’t wash with campaigners. Architect Roland Ostertag, who offered his own design as an alternative, branded Stuttgart 21 “cultural barbarism” and compared the destruction of the station’s wings to “amputation – like cutting a person’s arms off.”

The station, designed by the controversial German architect Paul Bonatz and built between 1914 and 1928, has importance as one of the first true Modernist buildings in Germany.

“It’s our best example of traditional Modernism,” Roser said. “It was very innovative because it used a cubist style to create three separate facades. It’s important not just for Germany but for Europe.”

The new design, by Düsseldorf architect Christoph Ingenhoven, who was unavailable for an interview, would put the station platforms underground and create a sleek, futuristic plaza at ground level, covered by an undulating roof with eye-shaped light wells.

The network of tunnels would improve the flow of trains through the station and create a high-speed link stretching from Paris to Budapest. It would also connect the centre of Stuttgart to the airport, sharply cutting the travel time.

Campaigners admit that saving the Bonatz Hauptbahnhof hasn’t exactly stirred the Stuttgart public into a frenzy, partly because Deutsche Bahn has allowed the station to become scruffy.

Instead, the future of the project is likely to come down the cost, they acknowledge. The official upper limit is €4.5 billion, and Deutsche Bahn boss Rüdiger Gruber has said the project will have to be scrapped if a current cost review – due to be released by the end of the year – comes in above that figure.

But would it really be scrapped? The CDU’s Löffler said the project would be “dead” if the review indicated it would blow the budget. But he quickly added he personally wouldn’t abandon his support and said Gruber had personally assured CDU politicians it could be done for €4 billion.

Certainly, priceless political capital has already been invested in the project.

But that hasn’t discouraged the conservationist campaigners, who are watching keenly for the results of the cost review while continuing with their regular Monday protests at the station.

“I think it will be cancelled,” Roser said. “I’m convinced of it.”