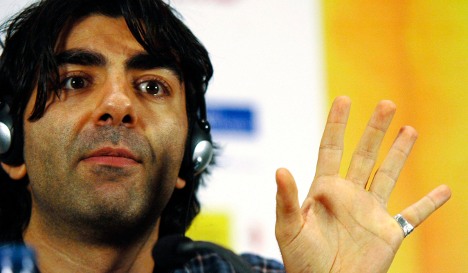 “This referendum conflicts with my understanding of humanism, tolerance and the belief that harmonious co-existence of peoples of differing backgrounds, races and religions must be possible,” Akin said in an open letter on Thursday.

“As a child of Muslim parents who do not see minarets as symbols of political Islam but rather simply the complete architecture of their houses of worship, I feel personally affected by the referendum. That is why I refuse to travel to Switzerland,” he said.

Akin was to have presented his new comedy “Soul Kitchen” in Zurich on December 16. The film, a light-hearted look at the multicultural mix in Akin’s hometown Hamburg, won the Special Jury Prize in September at the Venice Film Festival.

Akin is one of German-speaking world’s hottest filmmakers, winning a screenwriting award for his drama “The Edge of Heaven” in 2007 at the Cannes Film Festival and the Golden Bear top prize in Berlin in 2004 for “Head-On.”

The Swiss vote Sunday saw more than 57 percent back a proposition by a right-wing party for a constitutional ban on the construction of new minarets, overriding opposition from the government and most Swiss political parties.

The outcome inflamed tempers throughout the Muslim world, with a Turkish minister saying in an interview published Wednesday that he expected Muslims to withdraw their money from Swiss banks in response.