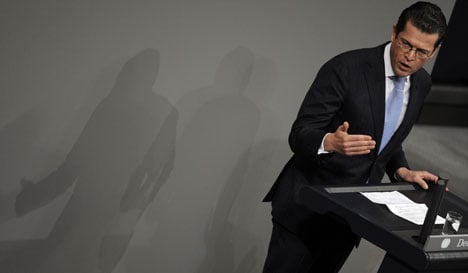 “Looking at it today it was not militarily appropriate,” Guttenberg told parliament, shortly before a vote to extend Germany’s troop deployment in Afghanistan.

Guttenberg had said earlier this week he would not hesitate to change his previous assessment of the September 4 bombardment near the northern Afghan city of Kunduz should it be warranted by newly available information.

Guttenberg on Thursday said Klein had faced “warlike circumstances” when deciding to call the air strike, therefore he would not let him take the fall for the incident.

“I have no absolutely no doubt that he acted to protect his soldiers,” Guttenberg said.

German lawmakers voted on Wednesday to open a parliamentary inquiry into the matter. According to NATO, the air strike killed up to 142 people including dozens of civilians.

A Defence Ministry official told the daily Stadt-Anzeiger this week that Klein considered his current situation “extremely horrific” and that the government’s goal was to keep him away from the public as much as possible.

The colonel, who decided to call in the air strike rather than attempt to retake the fuel trucks with other means, entered a therapeutic Kur treatment in mid-November, according the newspaper.