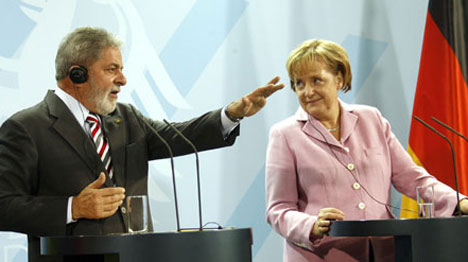 “Copenhagen will not be ideal – the writing is already on the wall – but at least it will be a significant step foward,” Merkel old reporters after talks with Lula in Berlin.

Lula added that he was “more optimistic than most” and expected “major progress” if not an “accord we have all been dreaming of” at the December 7-18 UN-sponsored conference.

Merkel, who like Lula plans to attend the Copenhagen meeting, agreed that some headway could be made on international efforts to curb greenhouse gas emissions and slow climate change.

Speaking for industrialised countries, Merkel said they were aware of their responsibility for the bulk of CO2 emissions but said no action plan could hope for success that did not bring emerging economic powers on board.

The two leaders signed several bilateral accords including an agreement for Germany to help Brazil prepare to host both football’s 2014 World Cup and the 2016 Olympic Games based on its own experience hosting the 2006 World Cup.

Lula and Merkel openly disagreed, however, on how to curb Iran’s nuclear ambitions.

“Our patience is running out,” Merkel said, adding that “no progress” had been made despite years of discussion with Tehran on abandoning sensitive nuclear work, which the West believes is aimed at producing an atomic arsenal. Iran denies the accusation.

“The more sensible thing for everyone would be to engage in negotiations and show a lot of patience,” said Lula, who is an advocate of dialogue with the Islamic republic and last month hosted Iranian President Mahmoud Ahmadinejad for a brief controversial visit.

“Those with (nuclear arms) must destroy their arsenals, that would be the better argument,” in negotiations with Iran, he said in a reference to the United States and Russia.