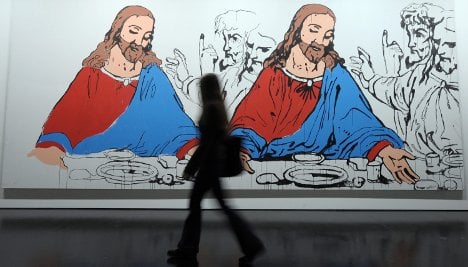 What would Jesus buy? Photo: DPA

It was just another Tuesday, but Germany’s Christian churches had a reason to let their bells toll this week. In the name of religious freedom, they won a major victory at the Constitutional Court in Karlsruhe against the heathen city of Berlin.

It had to be Berlin – a godless place that has ditched compulsory religion classes for schoolchildren and would like to prohibit prayer in school buildings. But the churches now have it from the highest judicial authority in the country – Berlin’s secular push has gone too far. Advent Sundays in the run-up to Christmas are holy and shops must remain closed. If there are to be any exceptions, then only to prove the rule that stores in Germany do not open on the seventh day of the week.

Department store clerks, trade unionists, church-goers and anyone with a family might welcome the ruling, but it’s annoyingly provincial to many retailers, stressed-out shoppers, non-Christians and plenty of average people with or without families. At the end of the day, it’s probably a compromise that everyone can live with. Crowded Saturday shopping during the holiday season will just have to do, as it did in the past.

Although the ruling’s rather miniscule effect on Berlin’s economy and familial bliss deserves little attention, one aspect should raise plenty of concern: How is it that Switzerland’s recent prohibition on minarets can be seen as an affront to religious freedom, but in Germany we allow churches rather than a democratically elected government tell us what to do with our Sundays? What happened to the religious freedom of those citizens who don’t believe in the Christian ideal of the Sabbath and would rather go to the shops than church?

The place to go for answers from now on is Karlsruhe, home to the Constitutional Court. No-one should underestimate the legal gymnastics required to reach this decision. According to the constitution, Sunday is a day to rest and rejuvenate the soul. There’s not a single word about God or Christmas or even the birth of Jesus. And no wonder – Sunday was never holy to the German constitution, which is why no-one could claim it was in the name of religion.

But that’s all changed now. The Constitutional Court’s decision refers directly to the Christian roots of resting on Sundays, constructing a legal precedent for the churches. If politicians from one of Germany’s 16 federal states want to re-think their retail shopping hours, it might now be a good idea to stop by the local bishop’s place to see if they have his blessing first. But how do you reconcile that with the right to a neutral, secular government? This is the real reason three Constitutional Court judges rejected the ruling. Had it been just one more, Berliners could have kept their Sunday shopping during Advent.

The topic of store opening hours might be banal, but the court ruling fundamentally changes the state’s relationship between religion and law. This happens to cut to the core of the endless debate about integration of Muslims in Europe.

Germany’s top justices have suddenly made the country’s constitution rather pious. But considering it’s not only Christian citizens that have a right to religious freedom, this should be the only time they are given preferential treatment.