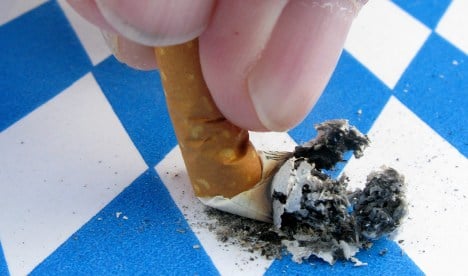 “We’re all sitting in a Bavarian restaurant and keep looking at the numbers in disbelief,” initiative spokesperson Sofie Langmeier told The Local on Thursday. “We are just incredibly happy. Someone said last night that it was the same feeling as the World Cup.”

The petition required 940,000 signatures, or 10 percent of the southern German state’s population, to force a popular vote. That figure was surpassed by more than 350,000 to make up almost 14 percent, according to preliminary results published on Thursday morning.

More than 2,000 anti-smoking advocates got the word out in a final push that brought long lines of supporters out to sign the petition across the state on Wednesday night.

“The last two days of such a vote are always the most intense,” Langmeier said. “The line in central Munich went from the main entrance of City Hall all the way to the Marienplatz train station – around the block.”

The measure, undertaken by the Ecological Democratic Party (ÖDP) and supported by the centre-left Social Democrats, the Greens and other ecological and athletic organisations, aims to roll back the more liberal implementation of the state’s general smoking ban that went into effect on August 1.

The current, more relaxed law allows adult smokers in pubs smaller than 75 square metres, in addition to restaurants and beer tents that create smoking sections in side rooms.

While the legislation has been heavily criticised by anti-smoking advocates, many in the state were in favour of dropping the ban completely. But according to the petition results reported on Thursday, there is also a substantial will to force the ban back to its original, stricter incarnation, which bans smoking in all public spaces.

Once official petition results are released on December 21, the state parliament must decide whether to pass a new law or put it to a referendum vote. Most experts expect the latter.

Meanwhile the Association for the Preservation of Bavarian Tavern Culture (VEBWK), which focused on fighting the smoking ban initiative, said it was disappointed in the petition results.

“A societal division now looms,” VEBWK head Franz Bergmüller told broadcaster Antenne Bayern, reflecting the views of many die-hard smokers in Bavaria who see lighting up as a fundamental right and integral part of their southern German culture.

But according to Langmeier, this is hardly the case.

“I am deeply convinced that this will not happen,” she said, adding that many smokers signed the petition too. “It’s an experience we all have in our circle of friends. Some are smokers and there’s a discussion about it, but none of us have been able to confirm that it’s a divisive factor.”

Initiative supporters plan to meet soon to discuss their move in effecting the next step of their fight for a smoke-free Bavaria.

“We’re not sure yet what our new strategy will be, today we decided we would celebrate first,” Langmeier said.

Smoking was banned in bars and restaurants in most German states starting January 1, 2008, the restrictions have been widely flouted and legal exceptions in many states have also weakened the smoking ban.