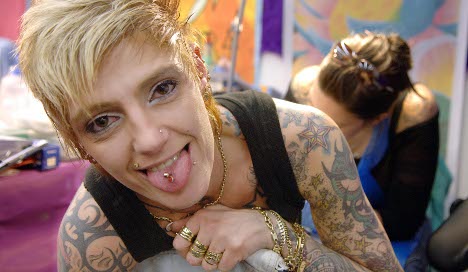 Germany’s cinematic sweetheart is the focus of this new exhibition, which opens at Berlin’s Film Museum Saturday. See rare photographs, correspondence, and other memorabilia documenting Romy Schneider’s career in Vienna, Berlin, and Paris during the 1950s through the 1970s.

Show some skin this weekend. For tattoo enthusiasts there’s no better place to be than Berlin. Nearly 200 artists from around the world converge on the German capital for this annual convention. Who knows, you could even be the next Tattoo Queen, or at least walk away with a new rose on your shoulder.

The Fall of the Iron Curtain

An excellent programme of films from Greece, Poland, Romania, the Czech Republic, and other countries affected by the collapse of the Soviet Union is being shown at the German Historical Museum over the next two weeks. Many feature English subtitles including Saturday’s “Lamerica” and Sunday’s “Myrsky (Stormheart).”

Though it may not have fallen from the sky, there will be snow on the banks of the Rhine River in Düsseldorf this weekend. Watch as the world’s most skilled cross-country skiers make their way around the track followed by live performances by local bands. Saturday’s Family Festival includes ski lessons for the little ones.

Old school hip hop and funk and soul classics. Sounds like a party you won’t want to miss. Smudo, one fourth of the German rap group Die Fantastischen Vier, turns the tables.

“West End Girls,” “It’s a Sin,” “What Have I Done to Deserve This?” Classic anthems from the soundtrack of your life. Sure, they’ve got a new album, and it’s a pretty good one too, but the Boys always kick out a classic jam or two. They hit Hamburg Wednesday.

Who knew that Santa and Barbie were such good friends? The pop culture icons are the subjects of this delightful exhibition at Hamburg’s Altonaer Museum this winter. See a fascinating display of about 450 Barbie dolls and 1500 Santas that depicts the evolution of the pair through the ages.

Munich’s medieval roots run deep, so it’s only fitting that one of the city’s many Christmas markets would be medievally themed. This weekend’s festivities include magic shows, Arabic storytelling, tightrope dancers, and lots of live music. Go and mingle with the sites, sounds, smells, and tastes of early Munich.

There’s an Appalachian spirit flowing through the air, or at least their will be on Wednesday when bands from the US and the UK break out some good old fashioned bluegrass. The Toy Hearts, The Steep Canyon Ranchers, and Beverly Smith and Carl Jones are all scheduled to perform at this year’s Festival of Bluegrass and Americana Music.

As the choir sings enchanting Swedish Christmas songs, Saint Lucia, with a crown of light on her head, leads a candlelit procession around Munich’s Kreuzkirche. Can an evening get any more magical?

Pale colours, washed out blues, faded greens, this is the palette of German photographer Elger Esser’s work. Fifty of his stunning images, depicting riverbanks, bridges, villages, and coastlines are currently on view at Kunstmuseum Stuttgart.