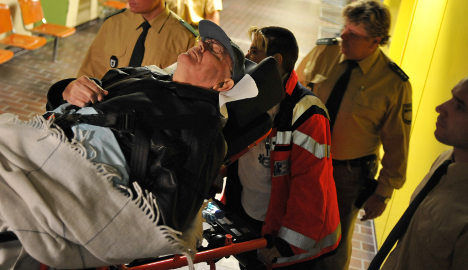 Demjanjuk’s lawyer Ulrich Busch argues that the case is a farce because German SS members at the Sobibor death camp, where he is accused of being a guard, were acquitted in earlier trials.

“How can it be that those who gave the orders can have been found innocent?” Demjanjuk’s lawyer asked a packed Munich courtroom on Monday on the first day of what is likely to be the last major Holocaust trial.

Demjanjuk, 89, was born in Ukraine and was one of 5.5 million Red Army soldiers taken prisoner by the Germans in 1942 as they swept eastwards before the tide turned and the Soviets began rolling back towards Berlin.

More than three million Soviet prisoners of war like Demjanjuk are believed to have died in captivity, either murdered by the Germans or from cold and hunger – but Demjanjuk was allegedly offered a way out.

While a prisoner, prosecutors say, he was recruited to work as a guard in one of the network of camps set up by the Nazis with the sole purpose of liquidating as many Jews and other enemies of the regime as possible.

He allegedly passed through the Trawniki training camp on his way to Sobibor, a camp in occupied Poland where a quarter of a million men, women and children from all over Europe perished in the gas chambers.

Deported from the United States in May, he is charged with assisting in the murder of 27,900 victims, the number of people on some 15 transports estimated to have died at Sobibor during Demjanjuk’s service at the camp in 1943.

Some experts say that Demjanjuk’s defence team may have a point.

“It is problematic that German guards at Sobibor were acquitted at the Hagen trials in the 1960s, whereas a foreigner who was forced to obey orders or die of hunger could be convicted,” said historian Hans-Jürgen Bömelburg.

But Stefan Schünemann, a lawyer representing some of the 30 or so survivors from Sobibor and other camps who are acting as co-plaintiffs or witnesses in Demjanjuk’s trial, said this no reason to let him off.

“If the German justice system made mistakes in the past, it is right that we should try and rectify them,” Schünemann said.

What is happening is a change of approach by Germany through attempts to bring to justice some of the many non-Germans who helped them murder six million Jews in the Holocaust, experts say.

“This is the first time that a foreigner trained at Trawniki … has been tried in Germany,” said historian Annette Weinke from Jena University. “There has not been a systematic enquiry into foreign collaborators.”

The reason for the change of heart is a new political will, Weinke said.

Siegfried Kauder, chairman of the German parliament’s legal affairs committee, said the German legal system “had no reason to reproach itself” but he admitted that Germany had been slow to bring non-Germans to trial.

“It is a political decision to decide whether someone who is not German should be tried in Germany,” Kauder said.

He added that former foreign minister Joschka Fischer, for example, on one occasion turned down a request from the United States for a war crimes trial to be held in Germany.

“I am happy that in this case we have decided differently,” he said.