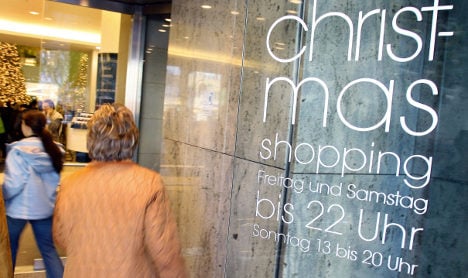 The court said the German capital could no longer allow stores to open on the four Sundays prior to Christmas, but permitted shopkeepers keep their doors open this Advent season one last time.

With the least restricted shopping hours in Germany, Berlin’s 2006 decision to allow stores to open on ten Sundays and holidays a year sparked a constitutional challenge by the Protestant and Catholic churches afraid the sanctity of their holy day was being unduly impinged.

After allowing the liberalisation of opening hours on every day of the week except Sunday a few years ago, the high court justices agreed there could be no further weakening of Germany’s Ladenschluss laws.

“A simple economic interest of merchants and the daily shopping interest of potential consumers are not fundamentally enough to justify exceptions for opening stores on these days,” said the court’s president, Judge Hans-Jürgen Papier.

Citing the so-called Weimar Church Article of the German Reich’s constitution from 1919, the justices said that Sunday had a special protected status to ensure Germans could rest from work and have time for spiritual rejuvenation.

Shops in Berlin will now only be allowed to open a few Sundays a year deemed in the “public interest” by the city government, as well as a handful other days for special events such as street festivals or anniversaries.

Both church and trade union officials welcomed the verdict as a victory for families and workers.

“This is very good news for the more than 100,000 sales people in Berlin,” said Erika Ritter, from the Berlin-Brandenburg chapter of services trade union Verdi.

But Berlin Mayor Klaus Wowereit called the ruling a “real step backwards” that did not take into consideration modern lifestyles.

Proponents of liberal shop hours also acknowledged the legal setback, but said it did not entirely rule out opening on Sundays.

“Occasionally being able to open on Sundays is crucial – especially in regions like Berlin with low consumer demand and lots of tourists,” said director of the HDE retail association Stefan Genth.

“Retailers don’t want to try and change the constitutional protection of Sundays, which is why stores only open after church mass.”