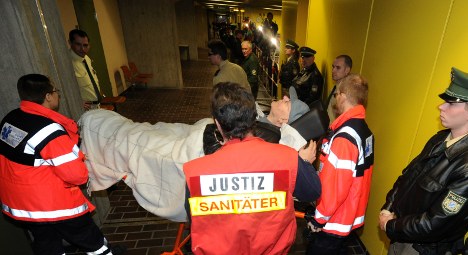 Demjanjuk, accused of helping to kill 27,900 people at the Sobibor camp in Poland, was covered in a white blanket from head-to-toe at the start of the second session of what is likely to be the last major Nazi trial.

Twenty minutes into the session the judge ordered a break because Demjanjuk, who was writhing about and waving his arm, complained of a headache. Twenty-eight minutes later he was brought back in, this time with his face uncovered.

This occurred just as medical experts were telling the court that he was fit to be tried.

In the first 90-minute session the defendant had been in a wheelchair, wearing a baseball cap, a leather jacket and thick glasses. When it ended, he was taken out groaning.

Efraim Zuroff, head of the Nazi-hunting Simon Wiesenthal Centre in Jerusalem, was unmoved, saying: “It’s a pathetic attempt to appear more crippled than he is. He belongs in Hollywood.”

Demjanjuk denies being at Sobibor, one of a network of camps erected by Adolf Hitler’s Germany in Eastern Europe with the sole purpose of mass extermination.

Prosecutors say they have an SS identity card bearing his name and transfer orders. He is accused of being at Sobibor from March to September 1943. If convicted, the Ukrainian-born Demjanjuk will almost certainly spend the rest of his days behind bars. If not, he will face an uncertain future as he is stateless, having been stripped of his US citizenship.

There are more than 30 plaintiffs in the case, most of whom lost family members at Sobibor. There are no living eyewitnesses who saw Demjanjuk there, so prosecutors will rely heavily on written testimony by people now dead.

Robert Cohen, a gaunt 83-year-old from Amsterdam whose parents and brother died at Sobibor, and who himself survived the Auschwitz death camp, was in no doubt that camp guards had blood on their hands.

“If he (Demjanjuk) was there, he killed more than 100 people per day – per day! That would be the worst crime ever,” Cohen told reporters. “He was one of the guards. The guards were all murderers,” said Robert Franzman, another Dutch plaintiff.

Thomas Blatt, 82, who survived Sobibor and who is due to testify in January, said that whatever Demjanjuk’s punishment, it will not fit the crime.

“I don’t want revenge against Demjanjuk, I just want him to say the truth,” Blatt said. “If it were up to me I wouldn’t even put him in jail. I don’t feel hate for him. There is no price he could pay for what he has done.”

Fellow plaintiff Rivka Bitterman from Jerusalem agreed: “I believe he will face justice on the other side. In this world there is no punishment that is fitting.”

Demjanjuk says he was a Red Army soldier captured in 1942 by the Germans and then moved around various prisoner-of-war camps, but Israeli and US courts have already established he was at Sobibor, one of many non-German guards.

Demjanjuk’s lawyer, Ulrich Busch, has said that even if it could be proved his client was in Sobibor, he would have been there under duress and could not now be held responsible for the atrocities carried out.

In court on Monday, Busch hit out at what he called “moral and legal double standards” of bringing Demjanjuk to trial while German SS members who were at Sobibor were acquitted.

“How can it be that those who gave the orders can have been innocent,” he said. This is the first time that a non-German has been tried in Germany over the Holocaust.

Demjanjuk was sentenced to death in Israel in 1988 for being “Ivan the Terrible”, a sadistic Nazi guard, but after five years on death row the conviction was overturned when Israel established this was another man.