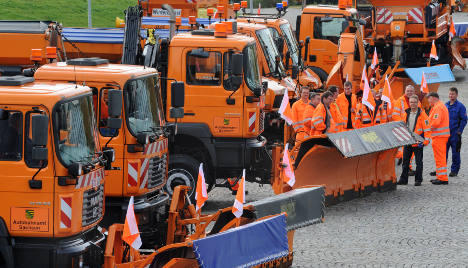 A low pressure system carrying polar air towards Germany will bring light snowfall in the mountains and frost overnight by December 1, the DWD said. But the seasonally appropriate weather will be gone again by Thursday when milder temperatures return.

On Tuesday, high temperatures will reach between just two and eight degrees Celsius. The west and northwest should remain dry, but light rain will fall in the east and northeast. Overnight the snow line will drop to between 700 and 400 metres in most of the country while temperatures sink to between zero and minus four degrees. Only the east will likely remain frost-free.

Wednesday will dawn cloudy but dry, and the sun might make an appearance in eastern Germany as the day goes on. Meanwhile the western half of the country will remain cloudy and rainy with temperatures between two and seven degrees.

Temperatures will continue to rise on Thursday with highs up to 10 degrees Celsius. The north and west will see heavy clouds and patchy showers, while the sun will grace the south briefly.

Thursday night will remain warm enough to avoid frost and only the southeast will see temperatures below freezing.

Winter begins according to the meteorological calendar on December 1. It is based on actual weather patterns instead of astronomical seasons, which focus on the earth’s position in its orbit around the sun.