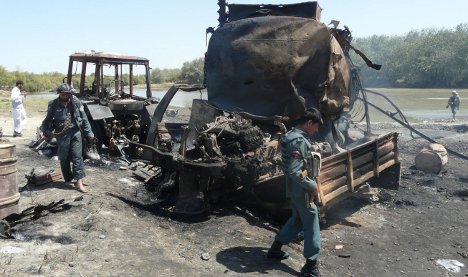 Guttenberg told the the newspaper Bild that he would not hesitate to change his previous assessment of the September 4 bombardment near the northern Afghan city of Kunduz should it be warranted by newly available information.

“It’s clear that mistakes were made at the scene, both before and after the air strike,” Guttenberg said. “It will be determined by the current inquiry if the now available documents put these mistakes in a different light.”

Jung, who had since taken up the labour portfolio in Chancellor Angela Merkel’s cabinet, initially defended the air strike as militarily necessary and was slow to acknowledge it had killed scores of civilians. Guttenberg also defended Klein’s actions in early November, leaving him open to criticism from the opposition that he either did so before having all the facts or was also being willingly deceptive to protect Jung.

The Cologne-based daily Stadt-Anzeiger reported on Monday that defence policy officials at the Chancellery had determined the bombardment was not militarily necessary even before Germany’s September 27 general election. Citing high-ranking government sources, the paper said it was clear long before Guttenberg became defence minister that Klein could face legal proceedings for his actions.

The opposition in parliament is now preparing to open an official inquiry into the matter.

A Defence Ministry official told the Stadt-Anzeiger that Klein considered his current situation “extremely horrific” and that the government’s goal was to keep him away from the public as much as possible.

The colonel, who decided to call in the air strike rather than attempt to retake the fuel trucks with other means, entered a therapeutic Kur treatment in mid-November, according the newspaper.