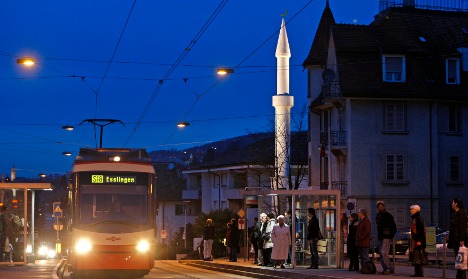 Signalling increased fears of the so-called “Islamification” of their country, Swiss citizens voted overwhelmingly to enact a constitutional ban on constructing minarets at mosques. The two right-wing parties that brought the issue to vote called the towers a symbol of Islam’s supposedly political agenda.

Head of the Turkish Community in Germany (TGD) Kenan Kolat told Berlin daily Berliner Zeitung that the decision was “very regrettable,” adding that basic rights such as religious freedom should not be allowed to come to popular vote.

“A minaret belongs to a mosque,” Kolat said.

But Wolfgang Bosbach, a conservative Christian Democrat heading the parliamentary committee on interior policy, said that the vote should be taken seriously. He told daily Hamburger Abendblatt on Monday that the vote reflects a widely held fear of Islam within German society – though he said German laws provided enough solutions for practical decisions about minaret construction.

“But there are spectacular plans for large structures, such as in Cologne’s Ehrenfeld district or in Duisburg-Marxloh, for which there is a lot of resistance simply because of the size,” he told the paper.

Bosbach added that is “possible that some of these large buildings were planned to signal how strong Islam has become in Germany.”

But Sebastian Edathy from the opposition Social Democrats told Berliner Zeitung that the majority vote was “very problematic,” adding that countries guaranteeing religious freedom must allow members of different faiths to build houses of worship.

“If this initiative triggers a dynamic in other European countries – and the danger is there – then the Muslims will have no place in Europe in the end,” she said.

The architect in charge of a controversial new Cologne mosque Paul Böhm called the decision “undemocratic” and “unintelligent.”

Germany currently has some 206 mosques with minarets. Another 120 are being planned or are already under construction.