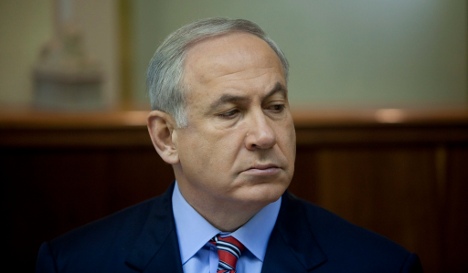 It said in a statement Netanyahu had not been feeling well on Sunday, and that a doctor had diagnosed “a viral infection accompanied by a slight fever,” recommending that he stay at home to rest.

The statement said that after consulting the office of German Chancellor Angela Merkel, it had been decided to put off the joint cabinet meeting until January, without specifying a date.

Netanyahu and six ministers including Foreign Minister Avigdor Lieberman and Defence Minister Ehud Barak had been due to travel to the German capital for the meeting, officials said earlier.

The meeting was to have followed a similar one in Israel when Merkel visited in March 2008.

Germany is currently playing a leading role in efforts to broker a prisoner exchange between Israel and the Islamist Hamas movement for an Israeli soldier held by Palestinian militants inside the Gaza Strip since 2006.

Earlier on Sunday, Netanyahu told a cabinet meeting that “Germany has a crucial role to play in the peace process and in securing security.”

During Monday’s visit, Netanyahu and Merkel were to have visited the Holocaust Memorial in Berlin before holding a joint news conference.

Netanyahu, who was sworn in for his second term as premier on March 31, is legally obligated as head of government to make public his health records.

In early October his office said he underwent a routine colonoscopy and bladder examination, and that the 59-year-old’s results came back normal.

The colonoscopy follows the discovery of a benign polyp 18 months ago and the premier is next due to undergo the procedure in a year and a half, it said.