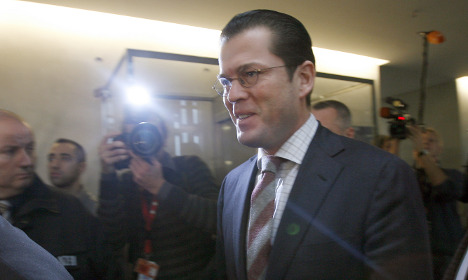 Nahles told Bild am Sonntag newspaper that every aspect of the affair had to be fully examined by an investigation committee.

The centre-left Social Democrats (SPD), apparently smelling the possibility of further political scalps, have over the weekend called for a broader inquiry by a specially-appointed committee, to investigate not only the airstrike itself but the subsequent cover-up of civilian deaths that led to the resignations of Jung and the military’s chief-of-staff Wolfgang Schneiderhan.

Jung resigned Friday when it emerged he had known civilians were killed in the September airstrike on two stranded petrol tankers even while he continued to maintain publicly that only Taliban fighters were killed.

The airstrike which was called by German commander Georg Klein, killed at least 100 people, including dozens of civilians, making it the deadliest German military encounter since World War II. Federal prosecutors are investigating whether Klein’s orders broke international law.

Nahles said the affair was far from over and that Guttenberg was “in the front line”.

Guttenberg, the popular 37-year-old aristocrat from the Christian Social Union (CSU), the Bavarian sister party to Angela Merkel’s conservative Christian Democrats (CDU), was economy minister at the time, but the SPD appear to be probing the possibility he may have kept quiet about the cover-up after he took over the defence portfolio.

“Faith in the political leadership has suffered enormously because of it,” Nahles said.

Over the weekend, the SPD stepped up pressure for a wider inquiry, with parliamentary leader Frank-Walter Steinmeier telling Hamburger Abendblatt newspaper: “It’s about a basic question of parliamentary democracy. The people of this country have a right to clarification.”

Greens parliamentarian Jürgen Trittin joined the call, telling the weekly Neue Presse newspaper: “The political manoeuvring in Berlin following the bomb attack is obvious: with the federal election in mind, there was an attempt to deny the reality.”

Such an inquiry looks likely to go ahead, with the CDU’s parliamentary leader, Volker Kauder, telling the Frankfurter Allgemeinen Sonntagszeitung that he had no objection to a broader investigation.

The conservative parties had a “great interest in a full and unreserved clarification of the events,” he said.

“We now know: It was known very early on that there were civilian victims in the bombardment of the two tankers,” Kauder said. “The Bundestag must find out why the corresponding report was kept secret.”

He was certain that Guttenberg would fully explain events, he said.

In a survey for Bild am Sonntag taken by the Emnid polling firm, 65 percent of German voters wanted the nation’s 4500 troops pulled out of Afghanistan before the next federal election in 2013. Some 29 percent were opposed to a quick exit. Emnid posed the question to 502 people.

The lower house of the federal parliament, the Bundestag, is due this week to vote on an extension of the deployment. The SPD’s Steinmeier has said his party would back the extension.