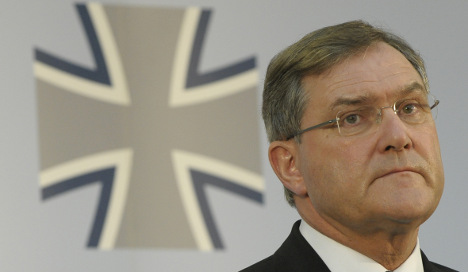 Gen. Wolfgang Schneiderhan, the chief of staff of the Bundeswehr, resigned on Thursday after revelations that the military did not immediately admit a bombardment called by a German colonel in September had killed several civilians in Afghanistan.

Jung also initially asserted that only Islamist insurgents had been killed in the air strike, but according to a secret Bundeswehr document attained by the German media, the former defence minister was informed of the deaths much earlier than he previously claimed.

Following Schneiderhan’s departure, the editorials in The Local’s media roundup suggest Jung’s days as one of Chancellor Angela Merkel’s cabinet ministers could also be numbered.

The centre-left Süddeutsche Zeitung said that Jung’s “communication tactics” in the Defence Ministry had always been “cover up and conceal.”

“Jung should consider whether he is at all capable to lead a ministry. If in fact he knew nothing about the reports, he was not in control of his ministry. If he knew, then he brazenly lied,” wrote the Süddeutsche Zeitung. “Angela Merkel should suggest Jung step down. That would be not just an act of political hygiene, it would also be a visible sign to the survivors of the victims that their suffering in Germany is finally being taken seriously.”

The centrist Berlin daily Der Tagesspiegel published an editorial simply titled: “Jung must resign.” The paper stated that “If Jung has the slightest bit of political intuition, he will quickly pull the emergency brake and step down. Before the chancellor turfs him out.”

Cologne’s Stadt-Anzeiger also had an editorial with a damning title: “Jung is beyond redemption.” The paper pointed out that though Jung is no longer the minister of defence, he was politically responsible for a “communication policy,” which in friendly terms could be called “stalling and evasion, and in unfriendly terms is known as trickery, disguise and perhaps even deception.”

The Essen-based Westdeutsche Allgemeine Zeitung wrote that the scandal plummets the Bundeswehr into “the biggest crisis in decades.” The affair not only brings “disrepute” to the military’s mission in Afghanistan, it hands metaphorical ammunition to the Taliban. “With their smokescreen tactics, the Bundeswehr’s top leaders have done German soldiers a disservice.”