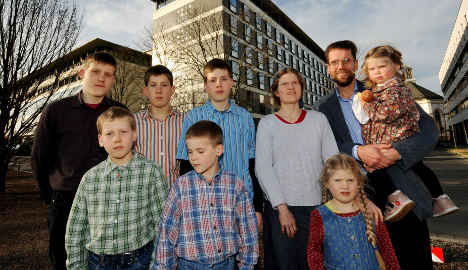 The couple from the Hessian village of Archfeld bei Herleshausen has seven children between the ages of two and 17, who they told the court they had hoped to “give the Bible their unlimited trust” through lessons at home.

Rosemarie (43) and Jürgen D. (48) were sentenced on Wednesday to pay a daily €1 fine for 60 days for defying the country’s compulsory school attendance. The ruling was a lenient judgement compared to a June 2008 court decision, which handed the pair three months in prison without parole. But the Frankfurt upper district court sent the case back to the Kassel district court due to legal errors.

Judge Jürgen Dreyer justified the new sentence with the fact that other confessed first-time offenders are usually fined with the expectation that they will change their behaviour.

“They will have to do something,” Dreyer said, adding that if the couple defies the court they will face jail time.

But after the trial concluded, the parents did not say whether they would obey the court’s orders.

The couple told the court they had home schooled their children because they believed they could do a better job than the public education system, adding that their secondary goal had been to impart Christian values.

On the first day of the trial last week, the father said that they home schooled because doubt in the existence of God was a normal facet of public school culture. The couple also criticised public schools for allegedly failing to educate children properly.

While the case’s prosecutor admitted that their teaching methods were “certainly good,” he explained that the content of their home lessons did not change their violation of compulsory school attendance and called their actions “criminal.”

Judge Dreyer said the couple’s light fine was not symbolic, but reflected their low monthly income of €1,500.

“They should be punished, not the children,” he said.

Home schooling is generally not allowed in Germany, where all children are expected to attend public schools. Exceptions are made for illness or physical disability in some cases, however.