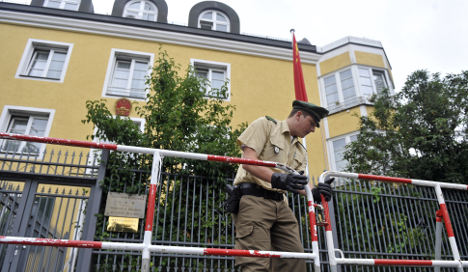 A file photo of the Chinese consulate in Munich. Photo: DPA

Authorities told the magazine that the Chinese general consulate has been running a spy network from the Bavarian capital, where several hundred Muslim Uighurs form one of the largest communities outside of China.

The World Uighur Congress is also located in the city, and many members are politically active in protesting what they see as China’s oppression of the ethnic group. Meanwhile China has in the past accused Uighur exile groups of supporting terrorism.

“According to findings by the Federal Public Prosecutor’s office, the Chinese government has therefore won a range of informants who report on the private lives of the Munich Uighur community for Beijing,” the magazine’s website said.

Investigators have observed Chinese diplomats meeting with the informants, but only the alleged spies are under investigation due to matters of diplomatic immunity.

The efforts by German authorities are the result of new policies created last year to curtail possible Chinese espionage, though this is the first time they have taken such drastic steps, the magazine said.

Two years ago Chinese diplomat Ji Wumin left Germany after he was discovered meeting with an informant about Uighur issues. But he departed of his own accord without being expelled. China is said to be interested in returning Ji to his former post, but this is now unlikely after the latest raids, which are related to his successor, the magazine said.