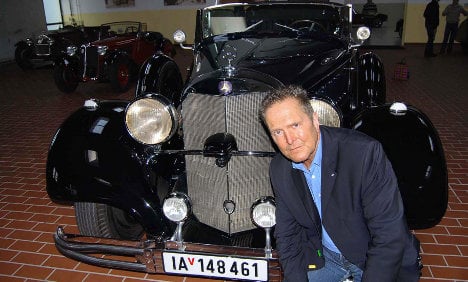 A middleman approached the 59-year-old with the task of finding the dictator’s car for a Russian billionaire several weeks ago.

“I know it belonged to Hitler after confirming it with Mercedes myself,” he told The Local.

During his lengthy search, the car expert discovered that after the Second World War ended the vehicle had been sold in Austria before it landed in the Imperial Palace car museum in Las Vegas. From there it went to a brewery mogul’s collection in Munich, but the man’s widow sold the car in 2008.

Last week he got a tip as to who the buyer was and is now negotiating with potential buyers, contrary to Express reporting the car had already been purchased and would be taken to Moscow.

The paper also estimated the vehicle’s worth at between €4 and €10 million, a sum Fröhlich refused to confirm.

“The cars are all still here and no money has changed hands,” he said.

Fröhlich said he has the car’s original papers and repair logs and matched the licence plate number – 1A 148461 – to old photos of Hitler in the vehicle during a parade.

He also checked with the public prosecutor’s office to ensure that the auto sale was legal.

The sale of the vehicle is expected to be finalised within the next few days, he said.