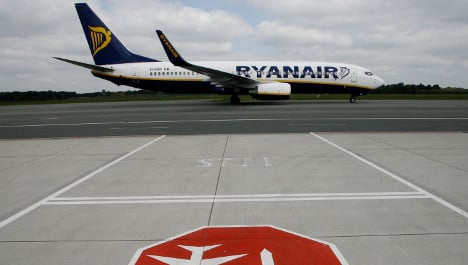 The daily Lübecker Nachrichten reported on Thursday that a 500-strong group against jet noise is accusing the airline of negligent bodily harm, endangerment of air traffic and wilful property damage in connection with the incident that occurred last week in Groß Grönau.

The woman apparently suffered a serious shock after a Ryanair jet coming in to land at the Lübeck-Blankensee airport flew so low that it sent several roof tiles crashing into her garden. She is now in the hospital with heart problems.

“The aircraft flew over and the elderly lady, the owner of the house, was in the garden at the time clearing up branches when the tiles came down,” police spokeswoman Sonja Kurz told AFP last week.

The Lübecker Nachrichten cited witnesses as saying that the Boeing plane flew much lower over Groß Grönau than normal.

“I almost pulled my head in. Normally the aircraft aren’t so low and so loud,” one woman who was walking her dog near the old lady’s house told the paper.

A spokesman for state prosecutors in Lübeck confirmed they were investigating, but Ryanair rejects any responsibility for the incident, saying the plane was not flying at an unusual altitude or speed.