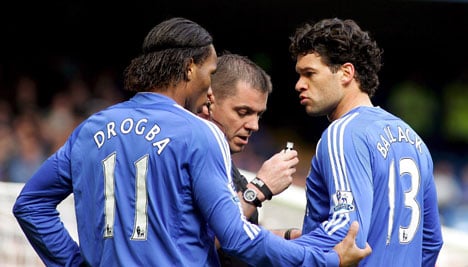 The entire German squad was in Hannover on Sunday at the memorial service for national goalkeeper Robert Enke, who committed suicide last Tuesday aged just 32 after a long battle against depression.

The game at Schalke 04’s stadium in Gelsenkirchen will be full of tributes to the Hannover 96 goalkeeper as both sides use the match to prepare for next June’s World Cup.

A minute’s silence will be observed, the Germany players will wear black armbands, Enke’s Number One shirt will be on the German bench and a video montage of his career will be played before kick-off.

German coach Joachim Löw, who has been deeply affected by Enke’s suicide, said he is not sure who will face the Ivory Coast and will see how his side trains.

“I think that after the memorial service, which was very important for us all to attend … we must now try to get back into a normal rhythm, to look ahead,” said Löw. “The next few days will of course be important for me as coach in order to observe the players and talk to them to see who is capable and who has the strength to perform well on Wednesday.”

Ballack, who had known Enke since he was 13, will be missing with a knee injury while his fellow Chelsea teammate Drogba has failed to recover from a chest injury he picked up against Manchester United recently.

With Ballack out, there may be a starting place for Bremen’s promising star Aaron Hunt, who qualifies for either Germany or England through his English mother.

Germany striker Miroslav Klose has not joined the squad after being quarantined for four days last week after his twin sons contracted swine flu.

Just like Löw’s Germany, the Ivory Coast qualified for the World Cup finals unbeaten at the top of their group and Drogba says the Elephants – coached by Bosnian Vahid Halilhodzic – have lofty ambitions in South Africa.

“To make it to the final will not be easy because there are great teams like Brazil and Germany, who have won the World Cup for many years,’ he told FIFA’s website recently.

“But my teammates and I want to make history and want to change the way the world sees African football. I hope that we’ll be the team that is going to go to the final and win the