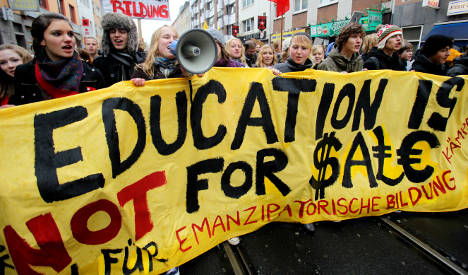 Around 6,000 students participated in a central march in Berlin, according to the police. Demonstrators carried banners reading, “Welcome to the education factory” and “Education too expensive? What does stupidity cost?”

Protests were planned for more than 40 cities across the country including Heidelberg, Bayreuth, Nuremberg, Münster, Aachen, Cologne, Bonn and Essen.

Many university students are upset over the introduction of bachelor’s and master’s degrees. Others complaints include overloaded degree courses, the introduction of modest tuition fees, social inequality within the educational system and chronic underfunding.

“We’re asking ourselves if we’ll even have a chance in the job market with a bachelor’s,” said one student at a protest in Cologne. “It’s irresponsible.”

German Education Minister Annette Schavan on Tuesday morning expressed understanding for some of the students’ concerns, but emphasised education was a top priority for Chancellor Angela Merkel’s new centre-right coalition.

“I agree with the points about improving the curriculum,” she told public broadcaster Deutschlandfunk. “The federal government will invest €12 billion in education over the next four years.”

Tens of thousands of students took part in nationwide protests in June. The new wave of demonstrations is expected to continue into December.