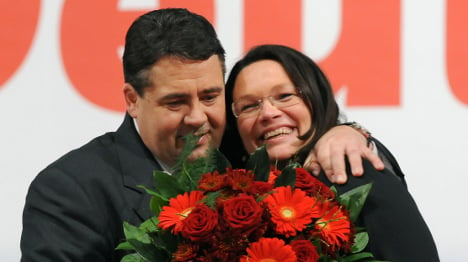 Concluding the three-day conference in Dresden, Gabriel said a Volkspartei’s policies and membership should reflect the community’s “entire professional and social experience.”

He announced a new plan for “green taxes” and defended his party’s decision to adopt as part of its platform the reintroduction of a “wealth tax”, which Germany abandoned in 1997.

In the debate on tax reform, “absurd subsidies” that encouraged environmental destruction would have to be put to the test, Gabriel, the former environment minister, said.

The plan, which is also being driven by former Finance Minister Peer Steinbrück, would put in place “social and ecological incentives” and reward “welfare orientated” acts.

However, careful to avoid any impression that the Social Democrats (SPD) were drifting to the left – a temptation he urged his party to resist on Friday night – Gabriel quickly denied a wealth tax was part of a socialist program.

A tax on the rich had “not been devised by (socialist philosopher) Rosa Luxemburg” but rather by the conservative Christian Democrats Chancellors Konrad Adenauer and Ludwig Erhard and was in any case anchored in Germany’s constitution.

Furthermore, the SPD wanted to begin an internal debate over its policy of German troops in Afghanistan. However, Gabriel stressed the party must not become self-absorbed but rather look outwards.

“My job is to organise the policy factory,” he said.

The new leadership trio of Gabriel, general secretary Andrea Nahles and parliamentary leader Frank-Walter Steinmeier vowed to work closely together and return the party to its former strength.

Asked how the party would lift its dismal result of 23 percent at the September federal election, Nahles answered: “Above all, we need patience.”

The election of Gabriel and Nahles in particular represent a major generational shift for the party. Gabriel replaced as chairman one of the party’s old warriors, Franz Müntefering.

“There is no easy way for us. The work isn’t done at the party conference,” he told Süddeutsche Zeitung.

The SPD’s opponents were quick to hammer the fresh leadership over its direction.

“The SPD is no longer a Volkspartei, rather a clientele party,” said Hermann Gröhe, general secretary of the conservative Christian Democrats. “They are fleeing further and further into the left corner. The populism duel with the (socialist) Left party will in the end throw the SPD deeper into crisis.”