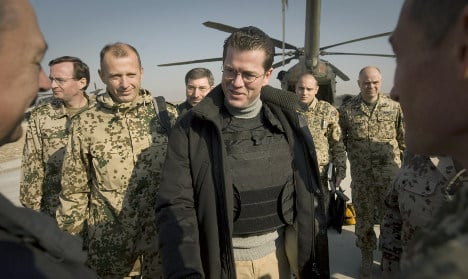 The helicopter crew responded swiftly, returning fire with machine guns, the paper reported. None of the three CH-53 helicopters appeared to have been hit, there were no reports of injuries and the flight continued.

Guttenberg, who had been visiting troops at the German army’s main base in Kunduz province, was told of the attack during the flight, the paper said. The attack happened shortly after take-off.

Just days earlier, Taliban soldiers had fired on a German military chopper, hitting an exterior petrol tank and forcing the chopper to make an immediate landing.

Later on Friday, Guttenberg and his delegation left Afghanistan to return to Berlin. Guttenberg told reporters on his plane that he wanted to visit Afghanistan again soon.

During his visit, he announced a modest troop increase of 120 soldiers, who will be deployed to the Kunduz base in the north of the country.