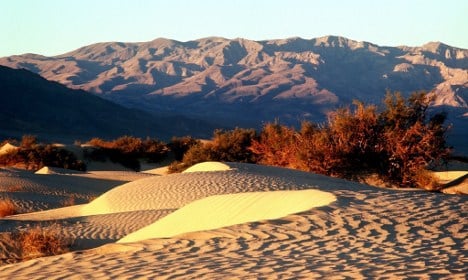 Hikers discovered the bones in a rugged area of the valley in the Mojave Desert, near California’s border with Nevada, according to a report in the Contra Costa Times.

Near the bones, they also found identification belonging to one member of the group from Dresden.

Police spokeswoman Carma Roper said the police were “fairly certain” the remains were of the German tourists, though a proper identification would take time.

Nevertheless, she called the discovery “an important milestone, since this thing began in 1996.” She said it was being treated for now as a criminal investigation though so far there was no sign of foul play.

The group – Cornelia Meyer, 27; her 4-year-old son, Max; her boyfriend, architect Egbert Rimkus, 34, and his 10-year-old son, Georg Weber – are thought to have got lost around July 23, 1996 in the valley, which is considered the hottest and most arid part of North America. Temperatures there can reach 50 degrees Celsius.

The last sign of them was their signatures in a guest book left in a box on a metal pole at a camp site. Their entry mentioned that they were aiming to go through “the pass” – possibly the Mengel Pass, a dirt road that crosses a barren mountain range.

The skeletal remains were found several kilometres from where the group’s abandoned minivan was found in Anvil Spring Canyon, several months after they disappeared.

The van had three punctured tires and tracks indicated it had been driven on the metal wheel rims for four kilometres before being abandoned.

The family was reported missing in Dresden when they failed to return. A massive search was mounted but, despite finding the van, the search team was unable to find the tourists’ remains.

Spokespeople for the German Interior Ministry and the Saxony office for criminal investigation said they had no information on the latest development.