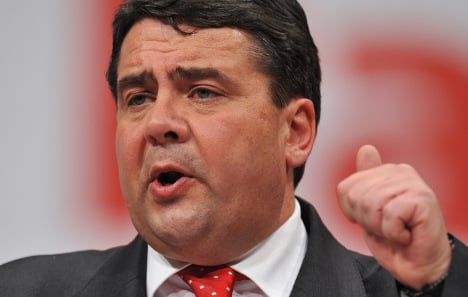 Not that way: Gabriel addresses the party. Photo: DPA

Addressing the Social Democratic Party (SPD) conference in Dresden, Gabriel demanded his party open itself up to the voters and thereby take up the fight for middle ground.

Interrupted repeatedly by applause during his marathon 102-minute speech, Gabriel acknowledged that the SPD had made decisions, particularly in the area of welfare cuts, during its 11 years in government that had angered its supporters.

But he added: “The SPD cannot and must not disown its time in government.”

Many on the left wing of the party are demanding that the SPD renounce some of its Agenda 2010 reforms, such as cuts to unemployment benefits and a hike in the retirement age.

Gabriel, who was previously environment minister in the “grand coalition” government, was elected unopposed as party chairman, with 94.2 percent of the vote from delegates.

“Instead of changing the middle, we have change ourselves,” he added.

Andrea Nahles, the de facto leader of the party’s left wing, was elected, also unopposed, as general secretary, though with just 69.6 percent of the vote.

Nahles vowed a fresh start for the party, which managed to garner just 23 percent of the vote in the September federal election, down 11 percent from 2005.

“Here and now we begin anew,” Nahles said. She said the SPD needed more passion and added that, in herself and Gabriel, it had this passion “in double”.

Keen to project the idea of generational change, Nahles said the party had had “enough testosterone” in the past few years.

On Saturday, former SPD candidate for chancellor Frank-Walter Steinmeier, who is now head of its parliamentary group, vowed to lead a vigorous and combative opposition.

“We must give (centre-right government) no peace,” he said. “We must fight these policies.”