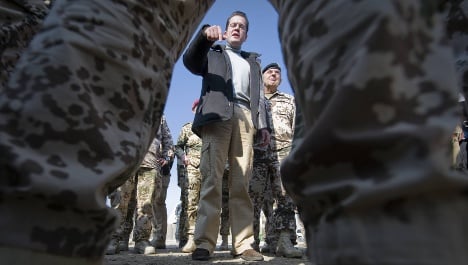 The extra infantry company will arrive in mid-January in the northern province of Kunduz, where most of Germany’s 4,400 soldiers are based, Defence Ministry spokesman Steffen Moritz told reporters.

Parliament has capped the number of German soldiers that can be sent there at 4,500. The mission is highly unpopular in Germany.

Britain says it will send an extra 500 soldiers to Afghanistan while US President Barack Obama said Friday that a decision on whether to send more US military “will be made soon.”

Germany’s allies are frustrated that Germany’s troops are based in the relatively peaceful north, leaving US, British and Canadian forces to bear the brunt of a tenacious insurgency in the south and east.

But Merkel refused on Friday to consider sending any more of her country’s troops until after an international conference aimed at transferring more security responsibilities to the Afghans themselves.

“It will see time horizons defined with the new Afghan government for the training of Afghan soldiers and police. We want to create the framework for a strategy of handing over responsibilities,” Merkel said. “Until then, we will keep the mandate at its current level.”

German Defence Minister Karl-Theodor zu Guttenberg, who was in Afghanistan this week, told Germany’s ARD television that some parts of the country would be ready to be transferred to Afghan control next year.

“There are areas, including in the northern region for which we are responsible, which from what NATO says where it will be possible to transfer responsibilities to the Afghans next year,” Guttenberg said.

He also met US General Stanley McChrystal, the commander of the 100,000-strong international force in Afghanistan.