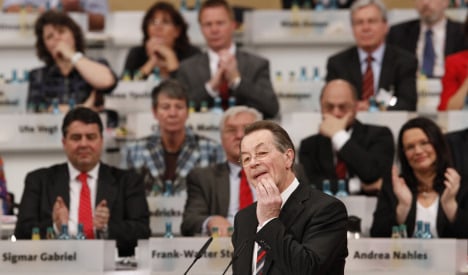 Explaining the SPD’s dismal election performance in September, its worst ever performance with just 23 percent of the vote, Müntefering blamed a failure to communicate the party’s policies.

But he warned the Social Democrats must not let themselves retreat into “the valley of tears,” urging the party instead to “engage and attack” Chancellor Merkel’s new centre-right coalition of conservative Christian Democrats and pro-business Free Democrats.

“We are fit and ready for battle,” he told about 500 delegates, in his last speech as chairman.

Seven weeks after the election debacle, the three-day party conference will formally elect the SPD’s new leadership. A new generation of Social Democrats will need to find a new direction for Germany’s oldest democratic party and address divisions over unpopular welfare cuts and a rise in the retirement age from 65 to 67 made while the SPD was in power over the past 11 years.

The pair have a tense but working relationship; Nahles, who is prominent on the left wing of the party, has been fiercely critical of the Agenda 2010 welfare cuts that Müntefering helped devise while Gerhard Schröder was chancellor.

Müntefering said the election result had been “bitter” but was not end of the party.

“We were not the enemy for the voters, but we were not interesting enough. For too many people, we represented yesterday and were out of fashion.”

The SPD “had itself to blame” for the defeat but was at the same time a victim of the circumstances, he said.

He added that the SPD would “take seriously” the job of opposition. And he stressed, “We’ll be back.”

On a personal level, he said some people in the party had regarded him as authoritarian – a fact he had taken in good humour. He received a three minute standing ovation.

New parliamentary leader and former candidate for chancellor, Frank-Walter Steinmeier said Müntefering had always “torn himself apart” for the party and “always got into the harness, as we needed him.”

Nahles, meanwhile, announced that generational change had come. If the SPD wanted to find its former strength, “then it cannot stay the same as it is,” she said.

But a decision about a change in the retirement age needed further discussion, she said. It is due to be raised from 65 to 67 in stages between 2012 and 2029.

Many on the left of the party want it returned to 65, but Nahles said a “return to 65 does not make us credible.”

Meanwhile, the left wing of the party used the conference to attack Müntefering and the generally conservative leadership of the party, blaming it for the election drubbing.