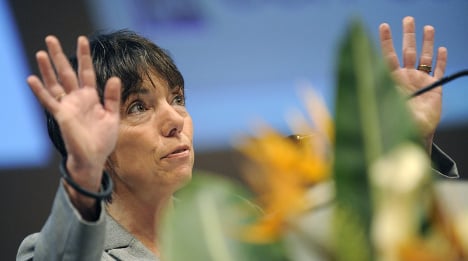 Dialogue between the churches, which has been strong and steady for the past 50 years, was no longer possible because of Käßmann’s election, said Rev. Georgy Zavershinsky, spokesman for the Russian church’s office of external relations in Moscow.

The church permitted no ordination nor even leadership roles for women, he said.

Ultimately, the Primate of the Russian Orthodox Church, Patriarch Cyril I, would have to rule on the matter, he said.

In late October, Käßmann, 51, was elected to lead Germany’s Protestant church, or Evangelische Kirche Deutschland (EKD), for the next six years. She is the mother of four children but was divorced from her husband in 2007.

However, it appears to be the fact of her being a woman, rather than a divorcee, that the Russians object to.

The leader of the Russian church’s foreign office, Hilarion Alfeyev, Archbishop of Volokolamsk, said the planned celebration of 50 years of dialogue between the two churches, scheduled for late November, would be the last contact between them, according to the Russian daily, Kommersant.

The end of co-operation between the churches appeared to have the backing of Russian media on Thursday, with one paper, Vremya Novostei, writing that “the Patriarch must not deal with the new leader of the German Lutherans.”

Many conservative Protestants in Russia also supported the decision. Alexander Prilutski, the leader of the Protestant church of Ingria – a Christian denomination based around St Petersburg – called Käßmann’s election a “sign of crisis in Western society.”

Käßmann said late on Thursday she was surprised by the Russian reaction.

She recognised that some churches did not accept women leaders but called for them not to impose their standards on others.

“Mutual respect is the most important basis for ecumenism,” she said.