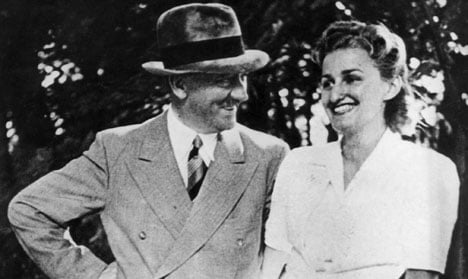 When “Swastika” was shown at the 1973 Cannes film festival, fights broke out and somebody threw part of a chair at the screen.

“All hell broke loose,” says the film’s Australian-born, Los Angeles-based director Phillipe Mora. “There were eruptions all through the theatre. Finally they stopped the film and a French guy came out, looking like a head waiter and said, ‘Ladies and gentlemen, this is the Cannes film festival, not a beer hall.”

The cause of the ruckus was, primarily, that the film appeared to humanise Adolf Hitler and his inner circle. Never-seen-before colour footage, shot mostly by Hitler’s mistress Eva Braun, showed the personification of evil cuddling his dog, playing with children and discussing “Gone with the Wind.”

Though “Swastika” went on to play in Britain, France and the United States, it was blackballed in Germany – until now. In the past fortnight, “Swastika” opened Biberach Film Festival in Baden-Württemberg and played at Berlin’s famous ufaFabrik. It will be screened on Friday at the University of Dresden and in early December in Laupheim, with further screenings planned.

The revival of “Swastika,” championed by the German documentary director Ilona Ziok, is a sign, Mora says, that Germany has matured in how it handles its Nazi legacy. After the Berlin screening, a German film producer effusively told Mora, a Jew whose father was born in Leipzig, that “Swastika” should be shown in every school.

It’s a far cry from its reception in 1973. Three decades before films such as “Downfall” began breaking the taboo against exploring the human side of the Nazis, Mora’s film provoked outrage.

“The film was made under the assumption that everybody knew Hitler was a monster and a murderer. I didn’t realise it was open to debate,” he says.

“But he was a man with a mother and a father and sisters and a pet dog. And that viscerally disturbed people. They had only seen Hitler ranting and raving in grainy black and white film. It took 30 years but now a new generation is interested.”

The story of the intimate footage is remarkable in itself. While researching his documentary, Mora visited Albert Speer, the Nazi architect and Hitler confidant, after his release from jail for war crimes.

Speer showed Mora some of his1930s home movies in which Eva Braun is seen holding a movie camera at Hitler’s Bavarian mountain retreat, the Berghof in Obersalzberg.

“I asked Speer, ‘Whatever happened to the footage from Eva Braun’s camera? He said, ‘It doesn’t exist.’ But he was lying.”

Around the same time, Mora’s German partner Lutz Becker met an American soldier who was among the first into Berghof at the end of the war. He asked the soldier whether they’d found any film and the soldier replied, “Yes, piles of it.”

Lost at the Pentagon

Mora went to the Pentagon, which found the eight cans of film and happily handed them over.

“We were just dumbfounded,” he recalls. “Here was this incredible footage that’d just been sitting there because no one had asked for it.”

As they watched the eight hours of film, eyes agog, the first thing that struck Mora was the sheer banality of Hitler’s private life and his inner circle.

Mora combined the Berghof footage with clips of Nazi propaganda films and newsreels to create a subtle work that has no narration and therefore does not force any interpretation on the viewer.

The result is something like a Rorschach inkblot, in which people see what they want. Some viewers have attacked it for being pro-Nazi, others for being anti-German.

James Baldwin, the late African-American writer who defended the film at the Cannes screening, privately told Mora his one complaint: “Swastika” was unfair on Jesse Owens, the black US athlete who won four gold medals at the 1936 Berlin Olympics. Baldwin didn’t like that the film showed a newsreel of Owens praising Berlin and the German people.

Watching “Swastika” today, it is hard to see Hitler on holiday as anything but quietly malevolent. The scenes in which he makes small talk with colleagues and friends are stiff and awkward. One journalist who saw the Berlin screening swears that even Hitler’s German Shepherd Blonda, not to be confused with the dictator’s other dog Blondi, cringes when he pats her.

Eva Braun, by contrast, is eerily gay and light-hearted. When her pet Scottish terrier, Stasi, begins to bark, she gently chides it by saying: “Stasi, don’t disturb your Führer.” Banal it may be, but far from normal.

“I don’t think you need to be a body language expert to see that this is a really strange, creepy man,” Mora says.

The director feels that the great question of how the Nazis led Germany down such a dark road has never been properly answered. But acknowledging that Hitler was still a human being – no matter how vile his crimes – is a vital step and a stark reminder that it could happen again, anywhere.

“If you think of Hitler as coming from outer space or as a supernatural demon, you are not going to see the next one coming,” Mora says. “But there probably will be another one.”