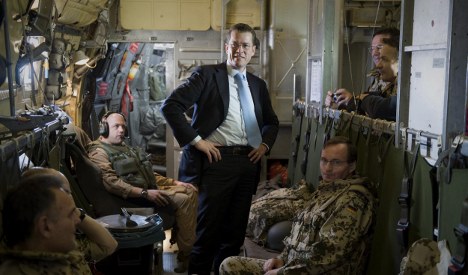 In his first visit to the war-torn country since taking the helm at the Defence Ministry, Guttenberg was to hold talks with the head of NATO’s ISAF mission Gen. Stanley McChrystal, his Afghan counterpart Abdel Rahim Wardak and President Hamid Karzai.

“We stand by our mission, but we want to know what the Afghan government is planning as its next goals,” Guttenberg said.

Later in the day, he will head to northern Afghanistan to inspect German troops stationed there. The Bundeswehr currently has around 4,400 soldiers deployed in the country, making it the third-largest contingent of NATO forces.

Speaking to German public broadcaster ARD on Thursday morning, Guttenberg said he would push for legal clarity for German soldiers engaging in combat. He said presently it is uncertain whether the use of force should be assessed according to criminal law, international law, or the laws regulating the police.

“That’s not an assessment the defence minister can make alone,” he said. “We will need an evaluation by the German judicial system.”

The chief state prosecutor’s office in Dresden handed the case over to the country’s highest investigators, who must now decide whether Klein’s decision to call the attack, which resulted in the death of up to 142 insurgents and civilians, was in line with international criminal law.

Just after the incident occurred, Berlin contended that only Islamist insurgents had been killed in the bombardment of two fuel trucks, but later admitted there had been an unspecified number of civilian victims. Klein was then accused of violating NATO’s rules of engagement by calling the strike.

The German parliament is expected to extend the mandate of the military deployment in December.